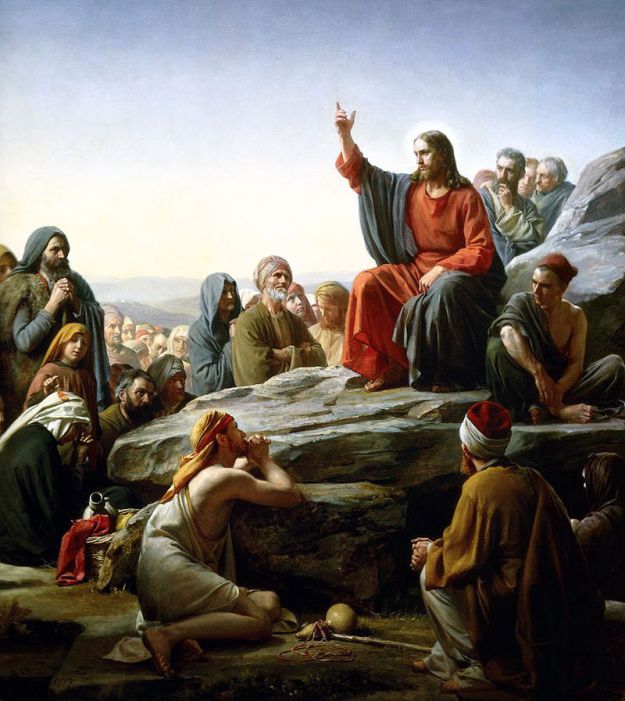 6 “Do not give what is holy to dogs; and do not throw your pearls before swine, or they will trample them under foot and turn and maul you.

There is a rhythm that underlies the Sermon on the Mount where the individual pieces, which are so often broken apart, attempt to flow together to form a linguistic and thematic resonance. There is a necessity to the practice of addressing things in smaller pieces but I do think it is important to hear the resonance of “Do not judge, so that you may not be judged” with “blessed are the merciful, for they will receive mercy” or the imperatives of reconciliation and peacemaking outlined in the interpretation of the commandments and the imperative in the Lord’s Prayer to “forgive us our debts, as we also have forgiven our debtors” and its restatement on forgiving trespasses and finally doing to others as you would have them do to you. This has the rhythm of wisdom literature which tells us to make the wise, or perhaps the whole/complete/authentic choice, in contrast to the hypocritical/inauthentic/self-righteous or pious choice. The Sermon on the Mount, and Matthew’s Gospel in general, is a tightly composed unit that needs to be heard and practiced together.

Matthew uses the terms hypocrite, hypocrites and hypocrisy more than the rest of the Bible combined, we saw it used three times in chapter six and again here. This is an important term for Matthew since it differentiates the practice Jesus is calling his disciples to in contrast with the practices of other groups. In the Sermon on the Mount the focus is on righteousness as it is practiced in the community, but within the individualistic way of hearing scripture most modern people use it is easy to transform communal practices of righteousness into individual acts of piety and instead of being those who hunger and thirst for righteousness who will be filled (see Matthew 5: 6) we attempt to become those whose practices of piety fill ourselves with our own self-righteousness. When righteousness is reduced to piety we find ourselves among those who Jesus has previously called hypocrites (see chapter 6) and here when we judge others by the standards we set we may be unaware (willfully or unwilfully) of out own failure to seek justice and righteousness.

When we talk about not judging so that we are not judged, we are not negating everything that has been discussed previously. We know that unreconciled anger, uncontrolled sexuality, broken relationships, untrue speech, violence and love for a limited group of people and excludes enemies are contrary to the kingdom of heaven. Exchanging piety for righteousness or attempting to secure our own future instead of trusting in God’s providence are contrary to the wisdom which is offered in these words. On the one hand there is truth to scholars who make this passage about not placing ourselves in the place of God and condemning a person or group as outside of the kingdom of heaven, but my worry about this type of interpretation is that it limits the way refraining from judging is not only about salvation/damnation matters. Matthew’s Sermon on the Mount is about imagining a community where relations are key to righteousness.

The parable of the person with a log in their eye also points to the reality that we often judge others most harshly in the areas we are least secure. Judgment is often a tool people use to compare themselves to another and to prop us their own insecurity as the critique another. Like Luke’s parable of the Pharisee and the tax collector where the Pharisee compares himself to the other by saying, “God, I thank you that I am not like other people: thieves, rogues, adulterers, or even like this tax collector.” (Luke 18: 11)which is lifted up as an example of how the disciples are not to trust in their own practices, this humorous visual of a person with a log in their eye is used to highlight the lack of self-awareness of the situation of the judging one.  Instead of comparison we are invited throughout the Sermon on the Mount to practice forgiveness and reconciliation, to value even those who we may have called enemies previously, and to learn to value the other person as a worthy part of the community.

Yet, a certain type of judgment, or perhaps better discernment, is necessary in our relations with others. The kingdom of heaven that the Sermon on the Mount proclaims encounters the kingdom of the world, not completely eliminating it. The individuals in the community may have those who label them as enemies or dangers. The community may love, pray and forgive others but it also doesn’t place the holy and precious among those who will reject or destroy it. The righteousness the community is to practice is not only practiced in a perfect world free from those who practice different values. How to be the salt of the earth and the light of the world in among others who may not value that role calls for wisdom among the people of God.