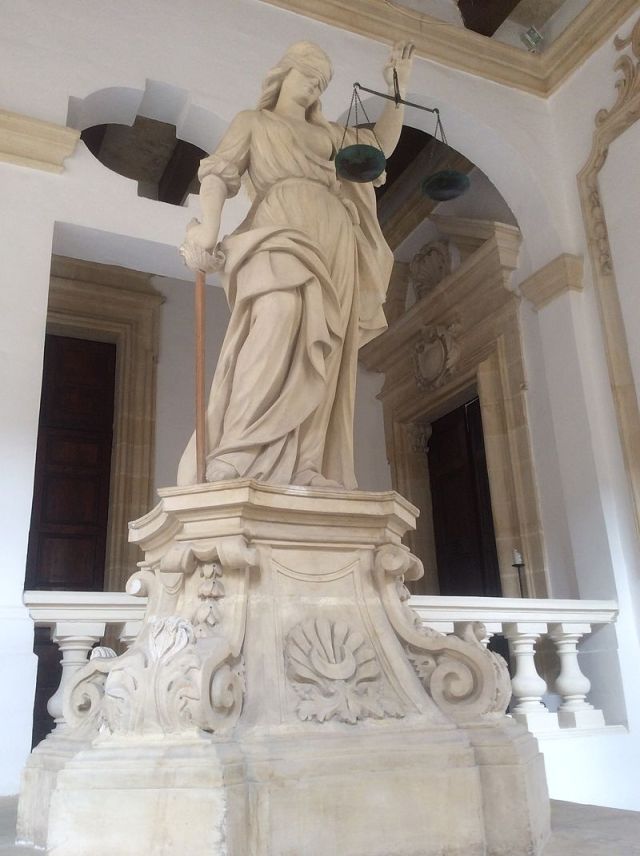 Lady Justice at the Castellania in Valletta, Malta shared by user: Continentaleurope under Creative Commons 3.0

1 “Beware of practicing your piety before others in order to be seen by them; for then you have no reward from your Father in heaven.

2 “So whenever you give alms, do not sound a trumpet before you, as the hypocrites do in the synagogues and in the streets, so that they may be praised by others. Truly I tell you, they have received their reward. 3 But when you give alms, do not let your left hand know what your right hand is doing, 4 so that your alms may be done in secret; and your Father who sees in secret will reward you.

Righteousness is an important concept to Matthew, and that is one of the reasons the translation of dikaisune as piety instead of righteousness in verse one obscures this linkage. While piety may capture the idea of the concrete religious acts like giving to the poor, prayer and fasting it also doesn’t capture the way that Jesus in Matthew’s, and the Hebrew Scriptures prior to this link a life lived in faithfulness to the covenant as more important than sacrifice or cultic ritual for one’s being in a right or just relationship with the God they come to worship. Justice/righteousness (the same word in Greek and Hebrew) is a critical concept of how one lives in relationship with one’s neighbor and ultimately with God in Jewish thought. Now the reason for practicing this righteousness is examined in view of the neighbor.

In the musical Wicked, Elphaba (the ‘wicked’ witch of the West as she will be known in the Wizard of Oz) sings about how ‘No Good Deed Goes Unpunished” after several losses in her story. A few of her lyrics are worth quoting as we consider practicing righteousness before others:

One question haunts and hurts
Too much, too much to mention
Was I really seeking good
Or just seeking attention?
Is that all good deeds are
When looked at with an ice-cold eye?
If that’s all good deeds are
Maybe that’s the reason why
No good deed goes unpunished

This warning about how one practices righteousness is followed by three whenever statements (verse 2, 5 and 16) which expand upon this just practice of righteousness. The first has to do with the practice of providing for those in need. The Greek work eleemosune is one of two words, the other being dikaisune used in verse one, used in the Septuagint (the Greek translation of the Hebrew Scriptures) to translate the Hebrew tsadeqah. (Case-Winters, 2015, p. 87) Justice/righteousness in Hebrew thought involves how one cares for the at risk members of the community and there are numerous provisions in the law to ensure that there is a means for the poor, the widow, the orphans and the strangers in the land to be cared for.  We think of alms in terms of charity for the poor, but the Hebrew people thought of this in terms of justice and righteousness. Yet this righteousness is not to be proclaimed to call attention to the giver, but instead is done for the benefit of the neighbor. It is done without fanfare and without consideration for the reward of the individual but instead is done for the sake of the community that the person able to give to those in need is called to live within.

The paradox of the visible community (see Matthew 5: 13-20) and doing righteousness in secret may seem strange to people used to thinking about righteousness and its practice in individualistic terms, but the key is that the disciple acts in a way that calls attention to the community and not to the individual. As Warren Carter can cleverly state, “Disciples are to “fish for” people, not impress them.” (Carter, 2005, p. 159)  Yet, it is the community of disciples which are the bait which lures people in the nets of the kingdom. One’s future security depends on the community and ultimately on the God the community serves rather than the individual acts to secure one’s prosperity. In a community where people give to those who beg of them and not refuse those who borrow from them acts of giving to those in need are a part of the character of the community. This is a community where the poor in spirit can experience the kingdom of heaven and truly be blessed.

Behind these actions of righteousness is the trust in a God whose kingdom has come near. God may provide for both the righteous and unrighteous, but the righteous can trust that God to provide for them as they live in a community of justice. This type of community and trust may be difficult to imagine for people living in an individualistic society where the weight of providing for one’s security rests upon the ability of the solitary individual, but in a kingdom where God provides the daily bread and where God’s will is done on earth as it is in heaven one can learn that practicing justice toward one’s neighbor requires neither public recognition nor assurances of recompense. The community that the Sermon on the Mount envisions rests upon the provision of a Father who sees the hidden things and knows the needs of the righteous ones of God.

Like Loading...
This entry was posted in Biblical Reflections, Gospel of Matthew and tagged Alms, Charity, Community, Gospel of Matthew, Mathew 6, Piety, righteousness, Sermon on the Mount. Bookmark the permalink.