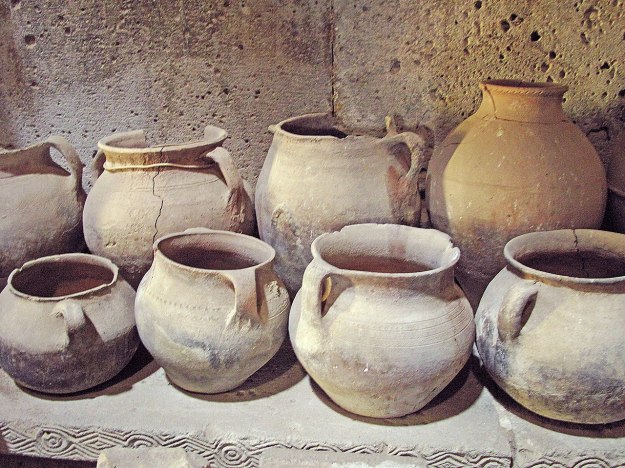 Cracked pots, Picture taken by Enric from the Monestary of Sanahin, Armenia shared under creative commons 4.0

The scriptures that both Christians and our Jewish ancestors have inherited are a deeply varied collection of works that attempt to make sense of the encounter between the people of God, the world around them, and the God who has called them. The reality that our scriptures include this violent, colorful, and disturbing book with a tragic ending is pretty exceptional because many people would attempt to hide a book that paints the tribes of Israel in an unflattering light, that contains several texts of terror, that presents Israel’s loss of identity so completely and its Judges as such flawed characters. This was a difficult book to look deeply at, not due to technical issues but because of its dark portrayal of the lawless world of this time between Joshua and the first kings of Israel.

The stories that are compiled in the book of Judges are ancient and their world is alien to us. It is hard not to impose modern ideas about civilization onto these stories, but in both technology and worldview this takes us to a very primitive place. The law as we see it outlined in the books of Exodus through Deuteronomy is absent and reading closely we see the patterns of worship often are indistinguishable from those of other communities like the Canaanites. I would agree with many modern scholars that the law probably reaches its final form much later than the events narrated in Judges, but I also am suspicious that there has been much lost from the time of Moses and Joshua where a common leader was able to unite the tribes. In a pre-literate society without a common set of leaders and where even the Levites fail to hand on the worship and the law of God we end up with a collection of tribes whose life and practices reflect the land of Canaan they live within.

The book of Judges is part of a larger pattern within the scriptures including 1&2 Samuel and 1&2 Kings which attempts to view history through a theological lens and make sense of the collapse of Israel and Judah. Many of the stories that make up Judges were probably well known and told for generations around campfires. They are stories that may point to a ‘heroic culture’ and ‘heroic individuals’ within a broader time of oppression. The narrator of Judges attempts to bring these stories in all their strangeness together into a common narrative which can point to a broader cultural disintegration among the tribes of Israel and prepare the people for the next stage in the history of the people, the time of kings. Samson, for example, struggles with his identity as a person set aside from birth for a particular calling and he does everything he can to deny this identity. Yet, Samson is reflective of Israel as a whole turning aside from their calling (in the narrator’s view) and the seemingly godforsaken world at the end of the book is reflective of Israel’s lack of faithfulness to the covenant.

I do think that the way our Jewish ancestors organized the Bible which includes Joshua through Kings as a part of the prophets (Nevi’im) rather than the writing (Ketuvim) is insightful to the purpose of this book. Instead of being a book of history which narrates the events, this is a theological telling of history to illustrate the consequence of covenant unfaithfulness for the people. The dark topics covered with the book are uncomfortable, but they have provoked some interesting and deep discussions both within the confines of these reflections and within my community. As distasteful as they may be, the texts of terror contained within the book demand a telling and my experience is that if we are unwilling to talk about them when others stumble upon them they will seek answers and not all those who talk about scripture among the broader church do it in a helpful manner.

I am glad to complete this journey. The book of Judges will probably never be one of my favorites, but I do feel like I have learned from this journey through the book. I have attempted to be sympathetic to the narrative and to as much as possible understand the stories in their context. I know my narration of this book is far less triumphal than some, and even the book of Hebrews (the one New Testament reference I’m aware of to the book) interprets it in a triumphal tone:

And what more should I say? For time would fail me to tell of Gideon, Barak, Samson, Jephthah, of David and Samuel and the prophets—who through faith conquered kingdoms, administered justice, obtained promises, and shut the mouth of lions, quenched raging fire, escaped the edge of the sword, won strength out of weakness, became mighty in war, put foreign armies to flight. (Hebrews 11: 32-34)

The book of Judges instead ends with the cry of abducted and traumatized women, the aftermath of tribes going to war with one another, and an Israel who looks more like Sodom than any vision of Zion. Just as dystopic literature can highlight the things that are wrong in our modern society, this theological exploration of this lawless and disunified time in Israel’s story helps to illuminate the dangers of the people losing their identity and conforming to the practices of the surrounding world. It may not be comfortable reading, but it can be enlightening.

1 thought on “Reflections After Walking Through the Book of Judges”