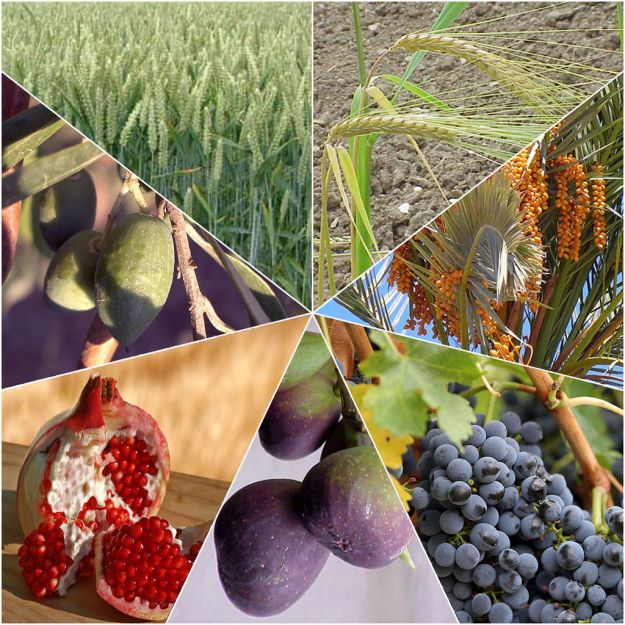 The Seven Species of the Land of Israel listed in Deuteronomy 8:8, Creative Commons Attribution 3.0

12 When you have finished paying all the tithe of your produce in the third year (which is the year of the tithe), giving it to the Levites, the aliens, the orphans, and the widows, so that they may eat their fill within your towns, 13 then you shall say before the LORD your God: “I have removed the sacred portion from the house, and I have given it to the Levites, the resident aliens, the orphans, and the widows, in accordance with your entire commandment that you commanded me; I have neither transgressed nor forgotten any of your commandments: 14 I have not eaten of it while in mourning; I have not removed any of it while I was unclean; and I have not offered any of it to the dead. I have obeyed the LORD my God, doing just as you commanded me. 15 Look down from your holy habitation, from heaven, and bless your people Israel and the ground that you have given us, as you swore to our ancestors– a land flowing with milk and honey.”

16 This very day the LORD your God is commanding you to observe these statutes and ordinances; so observe them diligently with all your heart and with all your soul. 17 Today you have obtained the LORD’s agreement: to be your God; and for you to walk in his ways, to keep his statutes, his commandments, and his ordinances, and to obey him. 18 Today the LORD has obtained your agreement: to be his treasured people, as he promised you, and to keep his commandments; 19 for him to set you high above all nations that he has made, in praise and in fame and in honor; and for you to be a people holy to the LORD your God, as he promised.

The twenty sixth chapter of Deuteronomy closes a long section which runs from chapter five (although many people move it back to the scene being set in Deuteronomy 4:44) through the end of this chapter. Here in the narrative Moses concludes his exposition of the commandments, statutes and ordinances of the LORD for the people of Israel. In this conclusion resides both ritual and liturgy that will continue to form the identity of the people for their life in the promised land. The manner in which the people of Israel bring in their offerings is mentioned several times throughout this portion of Deuteronomy but the way in which the author chooses to end this section liturgically explaining the significance of these practices is important to note.

In American Christianity there are several branches of the faith that are uncomfortable with the idea of a confessional creed. In a society based on individualism where the focus is on the individual’s faith and what they believe at each point in their lives the idea of a communal confession of faith seems unnecessary. I appreciate the gifts of the confessional tradition that I come out of and the way it binds me both to the manner Christians have understood the faith historically as well as locating me within a community that shares and wrestles with common confessions. Creeds have been used throughout the ages as summaries of a wider faith used in both catechetical (teaching future generations) and liturgical (worship) settings. The bible is full of these confessions of faith in both the Hebrew Scriptures and the New Testament (for example Philippians 2: 5-11) and various confessions of faith have been used as a part of the liturgy of faithful people for generations as a way of summarizing the faith. Deuteronomy 6: 21-25 is one example of a ‘credo’ a basic statement of belief to be used as a method of catechesis within the home. While in Deuteronomy 6 the focus is on the actions within the household that the parents will use to pass on the faith to their children and grandchildren and beyond, here we see confessions of faith used liturgically as a part of the telling of the story of the people of Israel. The practice of bringing the tithe and first fruits in Deuteronomy 14: 22-29 and in Deuteronomy 18:4 is now brought into a setting of worship with words that reinforce several basic parts of the understanding of the covenantal relationship the people would be expected to maintain in the promised land. Deanna Thompson outlines succinctly the key themes of the text as:
“the call for Israel to acknowledge God’s persistent care; the reminder that the land God is giving them is sheer gift; and the insistence that fundamental to Israel’s right relationship to God is the practice of attending to the needs of the stranger, the widow and the orphan.” (Thompson, 2014, p. 188)

As the offering are brought to the tabernacle or temple the people recite a brief exposition of their history which outlines their beginnings as a wandering people in Genesis, the journey to Egypt in the time of Joseph where they received the food they needed in the midst of famine, and then a brief synopsis of the Exodus experience including their oppression and liberation and being brought into the promised land. This short liturgical statement begins with the tenuousness of their situation as a landless people and later as slaves contrasted with their new but contingent identity as the covenant people of the LORD the God of Israel. The narrated history is now combined with the practice of giving which is intended to continue to form the identity of the people in their life in the land.

The liturgy in Deuteronomy 26: 1-11 focuses on re-telling the story of the people and the action of bringing the first fruit which is a result of God’s gracious provision for the people in the land. God has brought the people from being landless or oppressed to being in a land of milk and honey, therefore they are to bring in these gifts and celebrate and remember the provision of God. The focus on this first exhortation is on what God has done for Israel and now Israel is freed to enjoy the fruits of the land. In Deuteronomy 26: 12-15 the giving of the tithe Deuteronomy 14: 28-29 and a declaration that the individual has been faithful both in bringing the tithe (and not withholding a portion or using it in some other way) but also in the keeping of all of the commandments and asking the LORD to bless the peoples’ lives in the coming years.  Now the focus is on what Israel has done in response and their faithfulness to the covenant and understanding that because of their faithfulness the LORD will look down and allow them to prosper in the land. The section concludes with oaths that bind the people and the LORD the God of Israel together. The hope of this relationship is that “I will be your God, and you shall be my people; and walk only in the way that I command you, so that it may be well with you.” (Jeremiah 7: 23) As Brueggemann has helpfully outlined the italicized comments above and here now the people are to be utterly obedient to the LORD and the LORD will be utterly committed to Israel. (Brueggemann, 2001 , p. 249f)

This relationship between the LORD and the people as given in this giving and receiving of vows is to be a committed one, and perhaps the natural comparison is to the marriage vows that a couple make when they are married. This relation of the covenant to marriage will form a metaphorical background for Jeremiah (see for example Jeremiah 3) and Hosea (Hosea 2). Much of the remainder of Deuteronomy will call attention to the seriousness of Israel’s commitment in this covenant and the cost of disobedience as well as the LORD’s continuing commitment. As a people holy to the LORD their commitment is a calling. They will need to return to this covenant and recommit themselves several times throughout their story and yet there is the commitment that when they stumble and fall and recommit themselves that God will hear. They have been reminded of who they were and where they came from, how God acted to bring them graciously into this land filled with promise, how they are to respond to God’s faithfulness and the critical nature of their obedience.