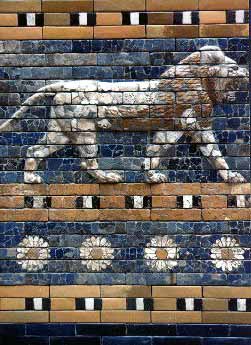 Detail from the Ishtar Gate (Reconstruction in Berlin’s Pergamon Museum)

I am going to break with my normal pattern with Jeremiah and put the text after the reflections. It didn’t make sense to me to cover these two chapters as separate because they are both a part of a long conglomeration of oracles against Babylon, set by the text in the fourth year of King Zedekiah (in the time between the first exile where leadership are taken into exile and the main exile where the largest group is taken into exile in Babylon). To place this oracle against Babylon coming from the mouth of Jeremiah combined with the sign act of throwing the scroll into the Euphrates by Seraiah seems to run against everything else Jeremiah is saying at this time. Many historical critical scholars would argue against this being composed by Jeremiah but the reality is that we have this massive book which we now receive as the book of Jeremiah and there is no way to go back to the ‘authentic words of Jeremiah’ or to tell exactly what Jeremiah the prophet wrote and some later compiler.

I take this long scream against the Babylonian empire about its coming destruction much the same way I take Psalm 137 which is a cry out of pain. The people of Judah after encountering the destruction of all that they know need some hope that God has not abandoned them to their fate, that Babylon is far from blameless and must also answer for its sins. The images and idols of Babylon are not more powerful than the LORD of hosts and will be put to shame and the armies which were viewed as an instrument in the LORD’s hands throughout the rest of the book now will have other armies from the north that come an terrorize them. The poetic language of disasters follows patterns seen throughout Jeremiah: beasts, arrows, clubs, violence. Warriors in misogynistic language become women, walls become leveled, honor becomes dishonor. Just as there was no balm for Judah and Jerusalem, now there is no balm for healing Babylon.

Babylon would fall to the Persian empire under Cyrus the Great, who the book of Isaiah lifts up as a messiah-which literally means anointed one as it is typically translated in English (see Isaiah 45:1).  It is in the continuing movement of armies and the realignment of power in the Middle East that the people in Babylon would be able to return to rebuild the city of Jerusalem, the temple and re-settle Jerusalem. Perhaps a part of this oracle which encourages people to leave Babylon also speaks to the reality of those born and raised in Babylon that have become accustomed to life in the Babylonian empire and an encouragement to return back to Judah.

Things are never as neat and tidy as they come out in oracles. Babylon would be conquered, but like Judah it never truly becomes a haunt of jackals, a place uninhabited that people avoid for all times. Babylon will be integrated into the next empire and the chain continues. Jerusalem and Judah are never the same again as well with the majority of the Jewish people being dispersed across the region from Egypt to Babylon to Asia Minor. In these chapters a powerless people hope for powerful actions by their God to deliver them again from their captivity. Much as in the founding story of the Exodus, now the hope is that God will see and hear God’s people’s plight in a foreign land and act to bring them back home again.

4 thoughts on “Jeremiah 50-51 The Cry Against Babylon”