Jeremiah 25- Drinking the Cup of Wrath 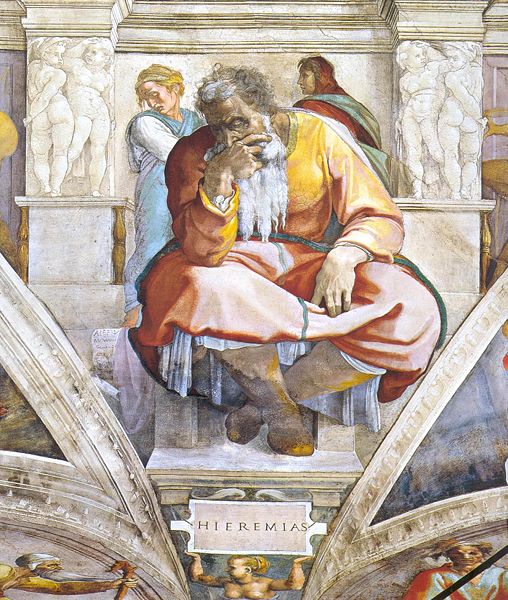 The Prophet Jeremiah by Michelangelo

1 The word that came to Jeremiah concerning all the people of Judah, in the fourth year of King Jehoiakim son of Josiah of Judah (that was the first year of King Nebuchadrezzar of Babylon), 2 which the prophet Jeremiah spoke to all the people of Judah and all the inhabitants of Jerusalem: 3 For twenty-three years, from the thirteenth year of King Josiah son of Amon of Judah, to this day, the word of the LORD has come to me, and I have spoken persistently to you, but you have not listened. 4 And though the LORD persistently sent you all his servants the prophets, you have neither listened nor inclined your ears to hear 5 when they said, “Turn now, everyone of you, from your evil way and wicked doings, and you will remain upon the land that the LORD has given to you and your ancestors from of old and forever; 6 do not go after other gods to serve and worship them, and do not provoke me to anger with the work of your hands. Then I will do you no harm.” 7 Yet you did not listen to me, says the LORD, and so you have provoked me to anger with the work of your hands to your own harm.

8 Therefore thus says the LORD of hosts: Because you have not obeyed my words, 9 I am going to send for all the tribes of the north, says the LORD, even for King Nebuchadrezzar of Babylon, my servant, and I will bring them against this land and its inhabitants, and against all these nations around; I will utterly destroy them, and make them an object of horror and of hissing, and an everlasting disgrace. 10 And I will banish from them the sound of mirth and the sound of gladness, the voice of the bridegroom and the voice of the bride, the sound of the millstones and the light of the lamp. 11 This whole land shall become a ruin and a waste, and these nations shall serve the king of Babylon seventy years. 12 Then after seventy years are completed, I will punish the king of Babylon and that nation, the land of the Chaldeans, for their iniquity, says the LORD, making the land an everlasting waste. 13 I will bring upon that land all the words that I have uttered against it, everything written in this book, which Jeremiah prophesied against all the nations. 14 For many nations and great kings shall make slaves of them also; and I will repay them according to their deeds and the work of their hands.

After going through Jeremiah for the past several months, for whatever reason writing this chapter I wanted to stop. Twenty five chapters of darkness with little hope is difficult to go through intentionally and I can only imagine the pain that Jeremiah went through in not only bearing the difficult message he is given to bear but also the constant rejection and persecution by his people. Yet, after letting sit for a couple days I was ready to return again to hearing Jeremiah’s words and trying to understand them. This is a chapter that is filled with frustration, broken dreams and lost hope. For twenty three years Jeremiah has spoken the message given to him and for twenty three years it has not been heard and so the time of change is coming. In the frustration there is the promise of an everlasting disgrace, of a falling never to rise again, of a complete loss of joy and gladness. It is a picture of the exile to come, and yet even in the language of everlasting in English comes from the Hebrew ‘olam which doesn’t refer to a timeless future but rather the forseeable future. Regardless the judgment is harsh and at the beginning of the time of exile the prospect of being alienated from one’s homeland and all one knows for seventy years must have seemed like an eternity.

Jeremiah probably seemed like a traitor to his people and his faith in saying that Nebuchadrezzar was a servant of the Lord, and yet he gives theological significance to the rise of the Babylonian empire and its king. Jeremiah gives voice to what others will not, that God is at work in the movement of nations and that even this pagan empire can be a tool that the Lord is using, and that the chosen people can be the recipients of both the Lord’s blessing and curse. The land and people that were meant to be a light will become darkness, the land of milk and honey will become a waste and ruin, and hope of a new light will have to come at some other time. In this time of the prophet’s heartbreak it is not here.

15 For thus the LORD, the God of Israel, said to me: Take from my hand this cup of the wine of wrath, and make all the nations to whom I send you drink it. 16 They shall drink and stagger and go out of their minds because of the sword that I am sending among them.

27 Then you shall say to them, Thus says the LORD of hosts, the God of Israel: Drink, get drunk and vomit, fall and rise no more, because of the sword that I am sending among you.

28 And if they refuse to accept the cup from your hand to drink, then you shall say to them: Thus says the LORD of hosts: You must drink! 29 See, I am beginning to bring disaster on the city that is called by my name, and how can you possibly avoid punishment? You shall not go unpunished, for I am summoning a sword against all the inhabitants of the earth, says the LORD of hosts.

30 You, therefore, shall prophesy against them all these words, and say to them:

The LORD will roar from on high, and from his holy habitation utter his voice;

he will roar mightily against his fold, and shout, like those who tread grapes,

against all the inhabitants of the earth.

31 The clamor will resound to the ends of the earth,

for the LORD has an indictment against the nations;

he is entering into judgment with all flesh,

and the guilty he will put to the sword, says the LORD.

32 Thus says the LORD of hosts:

See, disaster is spreading from nation to nation,

and a great tempest is stirring from the farthest parts of the earth!

33 Those slain by the LORD on that day shall extend from one end of the earth to the other. They shall not be lamented, or gathered, or buried; they shall become dung on the surface of the ground.

34 Wail, you shepherds, and cry out; roll in ashes, you lords of the flock,

for the days of your slaughter have come—

and your dispersions, and you shall fall like a choice vessel.

35 Flight shall fail the shepherds, and there shall be no escape for the lords of the flock.

36 Hark! the cry of the shepherds, and the wail of the lords of the flock!

For the LORD is despoiling their pasture,

37 and the peaceful folds are devastated, because of the fierce anger of the LORD.

38 Like a lion he has left his covert; for their land has become a waste because of the cruel sword, and because of his fierce anger.

In this vision of the cup of wrath, where Jeremiah takes it to all the nations beginning in Jerusalem and eventually ending with Babylon which seems as unforgiving a passage as one will find in scripture. The language is so angry it almost spits when it is said and yet perhaps it is precisely this language of cursing that is needed to move beyond the woundedness. As the cup and its wrath and curse pass among all the nations of the region no one is exempted. The sovereignty of God is completely and utterly unquestionable to the prophet. What is the pot to say to its creator when it is used in a way that the pot might find objectionable? To be honest I find this a very distasteful passage, it reveals a dark side of God in Jeremiah’s view that I have difficulty coming to terms with at times. It is a picture of God who is so wrapped up in God’s anger that the wrath must be spread over every nation, that each people is now being held to the same curse as the chosen people. Perhaps it only the language of brokenheartedness, the rage that needs to be given vent. Perhaps it is Jeremiah and others trying to assign theological meaning to the crisis and destruction going on around them. Regardless of where it comes from I know that as a 21st Century American I stand in a very different place than Jeremiah and there are times where I cannot faithfully place myself in his shoes nor give voice to the pain and anger in his words about the brokenness of his people and of all the nations.

This entry was posted in Jeremiah and tagged Babylonian Empire, Despair, Jeremiah, Wrath. Bookmark the permalink.

2 Responses to Jeremiah 25- Drinking the Cup of Wrath