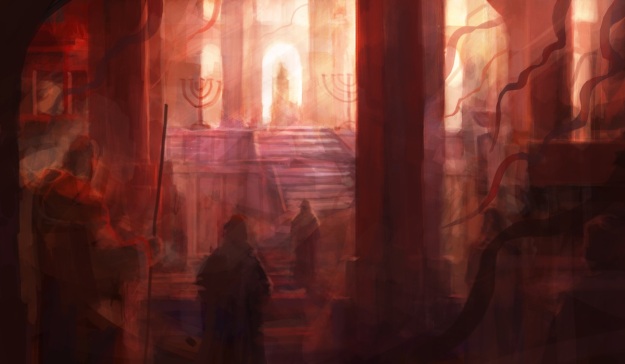 <To the leader: Do Not Destroy. A Psalm of Asaph. A Song.>
1 We give thanks to you, O God; we give thanks; your name is near. People tell of your wondrous deeds.
2 At the set time that I appoint I will judge with equity.
3 When the earth totters, with all its inhabitants, it is I who keep its pillars steady. Selah
4 I say to the boastful, “Do not boast,” and to the wicked, “Do not lift up your horn;
5 do not lift up your horn on high, or speak with insolent neck.”
6 For not from the east or from the west and not from the wilderness comes lifting up;
7 but it is God who executes judgment, putting down one and lifting up another.
8 For in the hand of the LORD there is a cup with foaming wine, well mixed; he will pour a draught from it, and all the wicked of the earth shall drain it down to the dregs.
9 But I will rejoice forever; I will sing praises to the God of Jacob.
10 All the horns of the wicked I will cut off, but the horns of the righteous shall be exalted.

This short psalm which points to trusting God in the presence of those who are boastful and wicked may, like the previous psalm, originate in the context of the destruction of Judah by Babylon. The first three psalms of book three of the psalter are likely placed together intentionally at the beginning of the psalms of Asaph. Although the psalm itself does not have many references that would specifically point to the destruction of Jerusalem or the exile in Babylon it shares common language with the prophets of that time, particularly Habakkuk. Yet, the psalm itself can be a source of strength for anyone who is waiting for God to lift up the weak and bring down the arrogant, silence the boastful, and judge the wicked.

The psalm likely takes place in the context of a worshipping community praising God in preparation for petitioning God with their concern. The initial verse is a challenge to translate and understand because of the phrase ‘your name is near.’[1] Yet, if this is initially spoken within the context of a worshipping assembly in the temple (your name’s dwelling place in the previous psalm) it is a community giving God thanks in the midst of the temple. The words of the assembly are interrupted by God’s voice beginning in the second verse where God declares that at the appointed time God will judge with equity. The divine oracle may extend through verse five or verse six, but these words from the God who holds the pillars and foundations of the earth in the midst of the chaos tells the wicked and boastful not to sound their own horn. Perhaps this is the boastful Babylonians who are gloating in their military might and national power, but in the presence of the God of Israel their insolence is an annoyance. The solution to the crisis of that time will not come from the east (Egypt) or the west (Babylon) or the wilderness. The lifting up of the oppressed and lowly will be accomplished by the God of Israel. Verse eight uses a common image in scripture for God’s judgment, a cup,[2] and like the prophets the psalm expresses God’s judgment on the wicked and arrogant as a hope for the righteous who are suffering in the turmoil of the world. The divine voice returns for the final verse where the power (horns) of the wicked are cut off and the righteous are lifted up.

For the psalms, and the bible as a whole, the righteous live in dependence on God while the foolish, arrogant, and wicked boast in their own power and accomplishments. Even in the midst of the chaos of the world around them where the wicked seem to be powerful the faithful still assemble to give thanks to God and to anticipate God’s action to set the world aright.  The people of God have always been a “community waiting and hoping for justice.” (Brueggemann, 2014, p. 327) God’s justice may not be seen in the moment, but the community lives in hope and seeks out the places where they can hear God’s voice speaking to them. They wait for the time when the boastful are silenced and the wicked are brought down so that all of humanity and all creation can live in shalom (peace).

[1] The Hebrew versions of this (MT) reads “and near your name, they recount.” The Greek (LXX) and Syriac ancient translations read “and we call on your name.” (Nancy deClaisse-Walford, 2014, p. 602) I agree with the NRSV and NIV which follow the Hebrew as explained above.