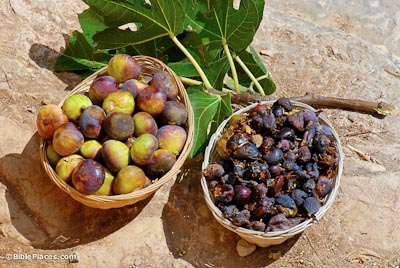 1 The LORD showed me two baskets of figs placed before the temple of the LORD. This was after King Nebuchadrezzar of Babylon had taken into exile from Jerusalem King Jeconiah son of Jehoiakim of Judah, together with the officials of Judah, the artisans, and the smiths, and had brought them to Babylon. 2 One basket had very good figs, like first-ripe figs, but the other basket had very bad figs, so bad that they could not be eaten. 3 And the LORD said to me, “What do you see, Jeremiah?” I said, “Figs, the good figs very good, and the bad figs very bad, so bad that they cannot be eaten.”
4 Then the word of the LORD came to me: 5 Thus says the LORD, the God of Israel: Like these good figs, so I will regard as good the exiles from Judah, whom I have sent away from this place to the land of the Chaldeans. 6 I will set my eyes upon them for good, and I will bring them back to this land. I will build them up, and not tear them down; I will plant them, and not pluck them up. 7 I will give them a heart to know that I am the LORD; and they shall be my people and I will be their God, for they shall return to me with their whole heart.
8 But thus says the LORD: Like the bad figs that are so bad they cannot be eaten, so will I treat King Zedekiah of Judah, his officials, the remnant of Jerusalem who remain in this land, and those who live in the land of Egypt. 9 I will make them a horror, an evil thing, to all the kingdoms of the earth– a disgrace, a byword, a taunt, and a curse in all the places where I shall drive them. 10 And I will send sword, famine, and pestilence upon them, until they are utterly destroyed from the land that I gave to them and their ancestors.

This vision takes place in the time between the initial exile of 598 BCE and the final massive deportation of 587 BCE. In 598 BCE, when the Babylonians come and deal with the people of Judea and the city of Jerusalem without the Judeans being able to effectively oppose them they take the elite of the land into exile leaving Zedekiah to reign in place of the removed Jeconiah. For the elite taken into exile it seems like the ending of everything they know, but they are the basket of good figs. This is the same exile spoken of, for example, in the beginning of the book of Daniel:

3 Then the king commanded his palace master Ashpenaz to bring some of the Israelites of the royal family and of the nobility, 4 young men without physical defect and handsome, versed in every branch of wisdom, endowed with knowledge and insight, and competent to serve in the king’s palace; they were to be taught the literature and language of the Chaldeans. (Dan 1:3-4)

With the officials, the artisans and the smiths taken into exile with King Jeconiah, what remains to surround the newly appointed Zedekiah are those who have risen to fill the void of power left by the removal of the elite. As Binyamin Lau describes it:

Whereas the exiled leaders had the capacity for leadership, their replacements come from the dregs of society, seizing the leadership vacuum as an opportunity to accumulate power. Violence and aggression prevail as paupers become princes overnight. Might makes right. King Zedekiah, young, weak, and bankrupt, cannot control the situation. (Lau, 2013, p. 131)

To those in exile there is now a word of hope. With their homes, wealth, position and status gone now God will act on their behalf to bring them back, to plant and to give them a new heart. Perhaps in the exile they will again find what it means to be the people of God. But for those still in Judah, the new officials of Zedekiah, the city of Jerusalem and the people of the land the nightmare is not over. Zedekiah will be led once again into conflict with Babylon and Babylon’s answer will be decisive. At this time where the people remaining in the land probably look upon those in exile as cursed and themselves as blessed, Jeremiah points to the opposite reality. Their horror still remains to come, they are not yet ready to receive a word of hope. Their course will still rely upon Egypt rather than the Lord. Just as the Assyrians became the instrument of judgment for the northern kingdom of Israel according to the prophets of that time, Babylon is the instrument of God’s judgment for Jeremiah. To oppose Babylon is to oppose God’s will at this time. The baskets of figs, good and bad point to a reality that defies the reality the people are experiencing at the time. The first harvest of the people out of the land become the first-ripe figs and in Jeremiah’s world of absolutes those left on the tree have spoiled and the time when they are swept away is quickly approaching.