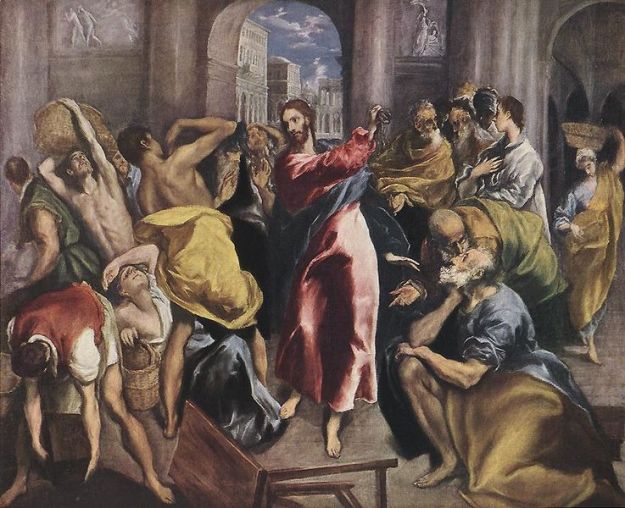 Christ Driving the Traders from the Temple by El Greco (1600)

8 Here you are, trusting in deceptive words to no avail. 9 Will you steal, murder, commit adultery, swear falsely, make offerings to Baal, and go after other gods that you have not known,

10 and then come and stand before me in this house, which is called by my name, and say, “We are safe!”– only to go on doing all these abominations? 11 Has this house, which is called by my name, become a den of robbers in your sight? You know, I too am watching, says the LORD. 12 Go now to my place that was in Shiloh, where I made my name dwell at first, and see what I did to it for the wickedness of my people Israel. 13 And now, because you have done all these things, says the LORD, and when I spoke to you persistently, you did not listen, and when I called you, you did not answer, 14 therefore I will do to the house that is called by my name, in which you trust, and to the place that I gave to you and to your ancestors, just what I did to Shiloh. 15 And I will cast you out of my sight, just as I cast out all your kinsfolk, all the offspring of Ephraim.

Jeremiah 7:1-8:3 is generally thought of by scholars as Jeremiah’s temple sermon, it breaks from the form of poetry in 4-6 and places Jeremiah at the gate of the temple proclaiming against the temple authority. Long before Karl Marx and other modern philosophers talked about religion serving to legitimate the dominant class the prophets railed against the priestly and monarchical authorities propping up their own positions with claims of divine right. To use the language of Liberation theologians God is exercising a preferential option for the poor and oppressed (if you do not oppress the alien, the orphan and the widow-these are those without a method of support in the society) and God is not willing to be in competition with other gods-idolatry and injustice are the two rallying cries of the prophet. Specifically appealing to the ten commandments as a central part of the covenant that the people are to live out of and contrasting that to the appearance of trusting in the temple and land rather than the Lord.

Jesus also had significant issues with the temple establishment in his own day, and it is not by chance that Jesus quotes Jeremiah 7:11 when he comes into the temple and throws out the moneychangers. Often there is a focus on the moneychangers, but if you read the context of this within Matthew, Mark and to a lesser extent Luke you can see that the issue is with the temple establishment in general. There is always the danger of any religion becoming a way of authorizing the status quo and it is the prophets who come and upset and challenge this. God has strong words for the temple authority in Jeremiah’s and Jesus’ time and in both cases that temple would be in ruins in the generation that followed.

The position taken by Jeremiah would be viewed as treason by the state, it would be challenging the ideological underpinnings of the religious and the monarchical authorities, it calls people not to trust in the temple.  It attempts to show the people that the temple and the sacrifices they offer cannot cover up a destructive way of life that is out of alignment with God’s covenant with them.  In the gate of the temple Jeremiah is called to challenge the foundations of the way of life of the people and God once again cries out for the people to return to the covenant so once again God may dwell in their midst.