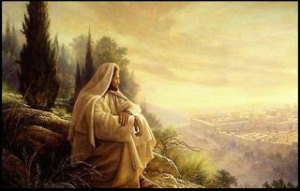 I listen to a lot of different types of music, and each type of music has its own set of emotions that they play to. For example, one of the emotions that rock and metal wrestle with is despair and depression, , rap tends to play towards defiance, popular music towards desire, and country, one of its many emotions is regret. It isn’t hard to come up with song after song in country that deals with regret, in fact there is a long standing joke about what happens when you play a country song backwards, that you get your wife back, your family back, your home back, etc…and often the regret is due to putting efforts into the wrong things, for a brief sampling this is one of George Strait’s older songs King of the Mountain:

I gave her that diamond she dreamed of

And I bought her a home with a view

I took her to the end of the rainbow

But all I left her was blue

Seems I never had time to love her

I thought I was king of the mountain

But I was only a fool on a hill

Now I start out this way because one of the reasons we struggle with prayer is we tend to treat God like the fool in the song, if our prayers are mainly asking for things we are setting ourselves up for a relationship of regret. Sometimes I think we treat God in our prayers like Santa Claus, and Santa Claus is great for a lot of things: Dear Santa for Christmas I would like: a new computer, a PS4, Gift Cards to my favorite restaurants and shops so I can get something for me, these books, these CDs, these movies, an even bigger flatscreen TV…OK you get the picture, but let me let you in on a little secret, we don’t love Santa. Oh he’s cool, but we don’t love him and we’re never satisfied with what he brings, there’s no real relationship there-he grants my wishes and as soon as I am done opening gifts I may find myself thinking “what’s next?” George Schwanenburg was the pastor of the church I grew up in, and he used to call the prayers that many people would say, “Gimme” prayers, and by extension the people who prayed them were “Gimme pigs.” God gimme this, God gimme that-and while there is nothing wrong with asking God for what we want and need, prayer is much more than that. Other times the only prayers people send up are the “Help” prayers. God, OK I’ve really made a mess of this and if you bail me out now, well….”

So what is this prayer thing all about, and how does it really help be draw closer to God? How does it help me love God? You see God doesn’t seek a relationship with us that is just based on giving and receiving, but on being present and spending time listening. In the midst of a noisy and busy world, prayer is the time we set aside to listen. There is a story told of Mother Teresa, who would spend hours in prayer each day, when she was interviewed once by a reporter, who asked her, “What do you say to God in all the time you spend in prayer?” and she replied, “Mostly I just listen.” Perplexed the journalist went on to ask her, “So what does God say in all that time” to which she replied, “Mostly God just listens too.”

I love the image from Psalm 141, which I would sing several times a week in seminary:
let my prayers rise up as incense before you, the lifting up of my hands as an offering to you.

It is my offering from my busyness back to God some of my time to be there and listen. It’s not about me, certainly I benefit from the time probably far more than God does, but it is one of the gifts I try to give to the relationship. It’s not that we have to worry too much as Lutherans of people being impressed or dazzled by our prayers, but ultimately it is not about us. And yet I do have to admit I am often skeptical of overtly public forms of prayer that call more attention to the individual than God, particularly with athletes it is pretty easy to wonder are they doing this to call attention to themselves or God. Prayer doesn’t have to be poetic or artistic or beautiful, and yet I sometimes thing we place that expectations on ourselves. For example when I ask in a group for someone to pray, often the response I get is everyone looking down at their toes, thinking, “if I just don’t make eye contact he won’t pick me.”Or the often unspoken feeling that somehow Erik and I are somehow closer to God and God pays more attention to our prayers than the prayers of anyone else.

Maybe from the Lord’s prayer we can learn something of what prayer is all about, and we begin with the relationship, Our Father…to which Luther states, God wants us to come to him boldly and in complete confidence as loving children come to a loving father.  Prayer and all communication takes place in the context of a relationship and God desires to have that close relationship with us. The prayer begins and ends with the desire that God may be praised and honored, and the prayer is offered in a sense of gratitude. One of my practices I have begun is the practice of writing thank you notes, now there are many reasons for me not to write a thank you note: I have horrible penmanship, there will always be things trying to fill my time and well they may even be important things, but I’ve learned that learning to say thank you is important to both my own well being (it puts me in a far better emotional state) and to the valuation of the relationship.

We pray for God’s kingdom to come, and as Luther says, “God’s kingdom comes on its own without our prayer, but we ask in this prayer that it may also come to us.” It is taking the time to ask God, what are your hopes and dreams for the world, what do you desire of me, what do you love? It goes back to learning more and more about the beloved and we ask that God’s will may be done on earth, which is a dangerous prayer for we may find ourselves being drawn into doing God’s will as we are drawn closer to God. Yes, we do ask for what we need, we do ask for forgiveness and we desire to become more like God an become forgiving people

There is no one right way to pray, nor is there one right way to be in love-but it takes time to get to know the beloved and no amount of presents can make up for absence. Without setting aside the time to talk and listen with God we may look back on regret on the relationship we longed for being reduced to wish lists and panic moments when it can be so much more.