The Place of Authority: A Brief History Part 4: Re-establishment, Disillusionment and Germination 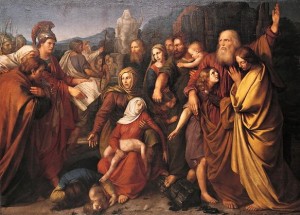 I think I need to be clear at this point that while I am doing a historical trek through Israel’s story, I am not trying to do a history of Israel at this point, or even of the Hebrew Scriptures.  I am intentionally trying to locate where authority rested within their story.  Within key transitions the places of authority do change and how the people react to that authority changes and see how that might inform our current questions of authority.  Hence, while it might be interesting to focus in greater detail on particular events, or to spend more time interpreting what is going on within a particular piece of scripture or what the theology of a particular author might be, that will have to be for another time and place as we continue on through the story.

A humorous illustration before we proceed. The Hebrew people remain deeply suspicious of external authorities which exercise authority over them, and so there will remain an antagonism between them and those who come to occupy their land.  In another Monty Python reference we have the scene of the French Castle where the French refuse to recognize Arthur’s authority. For this period the Hebrew people will stubbornly resist assimilation by the empires that they are a part of.

Beginning around 538 BCE, during the reign of Cyrus of Persia, there is the beginnings of the return to Jerusalem and Judea.  There are at least four major stages of the return which span a period of roughly 80 years, longer than the original period of exile, and even with the final return many of the people choose to remain settled and scattered throughout the empires of the day.  The diaspora (the dispersion) those Jewish people scattered throughout the empire continue to at various levels maintain their practices and stories that make them distinguishable from the nations around them, but I will be focusing in on the remnant that returns to the promised land since that is where the final pieces of the remembered story of the Hebrew Scriptures (or Old Testament) come from.

Over the eighty years of re-establishment, many of the people return and their first concern is the reclamation of their land (or perhaps in some cases the claiming of land for their family).Remember that in an agrarian society land is the primary source of wealth and power. It takes a great deal of effort by the leaders and prophets to get the people to focus on the effort to rebuild the temple, and even once it is rebuilt it cannot compete with the memory of the former temple.  In the memory of the people it is a shadow of the greatness of their past.  Even with the codification of the Torah (law-quite possibly Deuteronomy) by Ezra and the completion of the city wall under Nehemiah, Jerusalem and what remains of the former nation are completely dependent on the will of the nations around them.  The temple worship does regain some of its former status as one authority figure, but in the absence of a true monarch-temple authority that has the power to authorize the story of the people, the written and oral set of practices begin to take on a greater and greater role of what it means to be the chosen people.

Internal fault lines begin to emerge, not that they didn’t exist previously, but issues of purity and justice come into conflict with one another.  At least, in the remembered story it seems that in the time of re-establishment purity becomes the dominant issue, the removal of foreign influences—even when it means disbanding families—and being a ‘purer’ Hebrew people who worship the one Lord in holiness. This is the mark of a society intent on establishing and maintaining boundaries between the insider and the outsider—and I don’t mean this to sound as critical as it may sound—when one feels the world is out to destroy you it is natural for an us/them (or Jew/Gentile) dichotomy to emerge. Yet even though this seems to be the dominant voice a counter-voice emerges, the prophetic voice that never went away and attempts to refocus the central focus on justice.  Although there is a strong presence of the prophetic voice in the collected scriptures, it also never seems to gain the influence to reframe the story to create the type of society the prophets imagine.

Certainly within the prophetic voice, but also within the population there is disillusionment with the way things are.  Things are not the way people hoped they would be, the temple is a shell of its former self, different religious groups vie for power and influence among the people, various incarnations of leaders try to rally the people with varying levels of success-but the reality is that for most of this 500 year stretch they are a people under the rule first of the Persians, then briefly under Greece. When the Greek empire splits up into the Ptolemaic Empire (in the South) and the Seleucid Empire (in the North) Jerusalem will find itself firmly at the middle of the struggle for power.

A final defining moment comes in 167 BCE with the Maccabean revolt, an event commemorated by Hanukkah today and remembered in the books named Maccabees, where the pressure of the outside influence to conform to a Hellenistic (Greek) culture causes a religious revolt which for a brief moment grants Jerusalem its independence.  It is short lived, but it gives the people a memory of their practices defining themselves as a people who are willing to die for what they believe in.  Again this is not universal, there are certainly those willing to accommodate, but there are also those willing to revolt, and that fire will not go out again for some time.

Deep divisions continue to grow within Judaism. They will not be fully in control of their own destinies after the fall of the Maccabees , but the hope for a new king, a new David, a messiah will persist.  Religious authority will split between Saducees, who predominantly control the temple and accommodate with the kings like Herod, or whichever government official Rome places to govern Judea.  With Herod the Great (who rules from 40 BCE-6 CE) reconstructing the temple in magnificent fashion (at a magnificent cost) the Sadducees are able to operate from a position of privilege.  The Pharisees in contrast are more of a people’s movement focused on maintaining their identity through purity and right practice of the Torah. There are other groups, the Essenes who pull away and isolate themselves to remain pure, the zealots intent on driving the foreign influence from the promised land.  Herod and Rome have the military authority, the Saducees in partnership with the Roman authorities run the temple and all is in a state of tension at the turning of the ages.  We are approaching a great turning point in the story, from one group will emerge two-one that is new and one that will be completely reshaped.  It is to the turning of the ages that we turn next.

1 Response to The Place of Authority: A Brief History Part 4: Re-establishment, Disillusionment and Germination