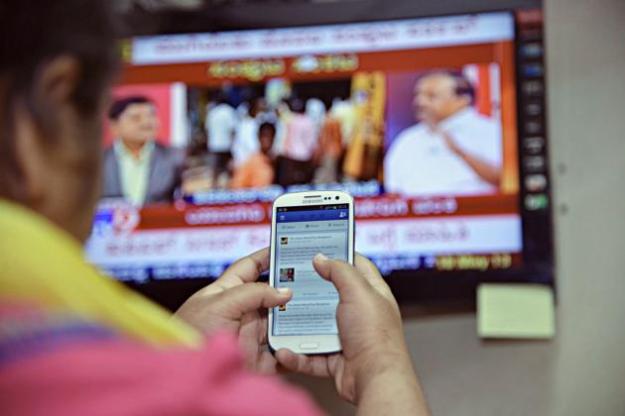 When I was growing up in the 1970s and 1980s the way we received our news was very different from the way we currently consume our news about the world around us. The technology was beginning to change but it was still a time of the three primary commercial networks (NBC, CBS and ABC) with the Public Broadcast Channel. Later Fox would come in on the UHF channels and cable TV would begin to emerge. It was a world of newspapers which were published daily and news programming which would be on at regular morning, evening and nighttime schedules. Perhaps the world moved slower: there were no cell phones, no social media, no internet. It was a world my children wouldn’t recognize and while I don’t want to get caught in a nostalgic idealization of that period I do want to reflect upon the changes that technology and our use of technology has changed us and how the economic models behind these technologies have shaped the news media we consume.

In 1980 a change began within the existing media of television with the advent of CNN, a network devoted to around the clock news coverage. Through a number of events, like the explosion of the Space Shuttle Challenger, the Persian Gulf War and the expanded political coverage of Presidential campaigns CNN and then additional dedicated news channels, like MSNBC or Fox News, began to shift the consumption of news from dedicated news times within the day to more frequent viewing throughout the day. Many organizations began showing news programming throughout the day in their waiting areas instead of networks programming. In the 1990s, as more people began using cable TV, the continual availability of new programming and multiple news channels cause the evolution of new types of news programming designed to keep people tuning into the various stations to keep the revenues for those channels going (since advertising is the economic driver of network and cable news). When news is viewed as a consumer product and the purpose is to keep people continually tuning into new and new commentary programs it needs to generate some type of reaction to keep people engaged. The media long ago figured out that people are emotional creatures and that emotions like anxiety and shared disgust would keep people coming back to their channels. This has led to a distorted perception of reality based on what will continue to get people tuning in and increasing the ratings of the news programming rather than an accurate perception of reality. Most people believe, for example, that the world in which we live is less safe than the world they grew up in but statistically this is not true, but media presents to people a reality that is focused on the most violent and most memorable crimes and creates an anxiety that is not based on a balanced view of our world.

As we entered the 21st Century the age of digital information continues to alter the way we get out news and has continued to lower the threshold of review for publication. With the advent of the internet the average user now has access to incredible amounts of information but relatively few ways to effectively filter that information. Search engines like Google, Bing and Yahoo all use algorithms to attempt to bring relevant information to the searchers screen but just because a website may be relevant does not ensure it is accurate, honest or true. While websites, blogs, twitter feeds and other places have provided access to people who would not have been able to publish through newspapers, journals and print media they also have removed or significantly lowered the peer review process designed to help insure that information is accurate. Especially with the advent of social media sites like Facebook where people can share information and links and the Facebook algorithm attempts to compute what other people want to see based on likes and shares (and an economic model that pays on advertising on a per click basis) it has led to intentionally misleading or incorrect but ultimately profitable reporting that causes people to view articles based on their shared opinions, disgusts and paranoia. In the past election the proliferation of false and misleading articles based upon a person’s political persuasion continued to build the level of anxiety and mistrust in the political and electoral system. It has become increasingly easy to create echo chambers by surrounding ourselves digitally with people who reinforce or enhance our beliefs, biases and prejudices. It has become much easier to criticize another person’s views without ever having to encounter and experience the other person as a real person because of our digital technology. While the availability of information through the internet and the vast data it can provide is a remarkable technological breakthrough the economic engine of the digital reporting cycle and its continual reinforcement of the truth we want to see, rather than having some peer reviewed or other method to attempt to make the news we consume an accurate picture of reality has led to what many are beginning to term a post-truth reality.

In our society news is a consumer product and probably always will be and yet there are a number of ethical questions that we should be asking about the news that we consume. Is there a way to create a better system that provides a news media that reflects reality better than profitability? Are there ways to encourage people to become critical consumers, especially online, where the threshold for publication is incredibly low and there is no accountability for publishing dishonest or misleading information presented as news? Are we willing to settle for a smaller America where our tribe of people is only those who agree with us, who may look like us and believe the same way that we believe in or are we willing to experience the cognitive dissonance of engaging with someone whose reality may be very different than our own? With each new technology there is an ethical lag as we attempt to figure out the ethical implications of the new technology, what would an ethical consumption of digital media look like? What would be the expected ethics of media presented as factual reporting?

These are not easy questions but they are things that we need to wrestle with if we want a nation of citizens that can make informed decisions then we need the information they receive to be accurate. If we are only consuming media that feeds our anxieties, disgusts, prejudices and biases then we will continue to have an increasingly polarized and divided society. Perhaps it is my idealistic nature but I do believe an ethical media is possible, although difficult, in age of digital consumption.