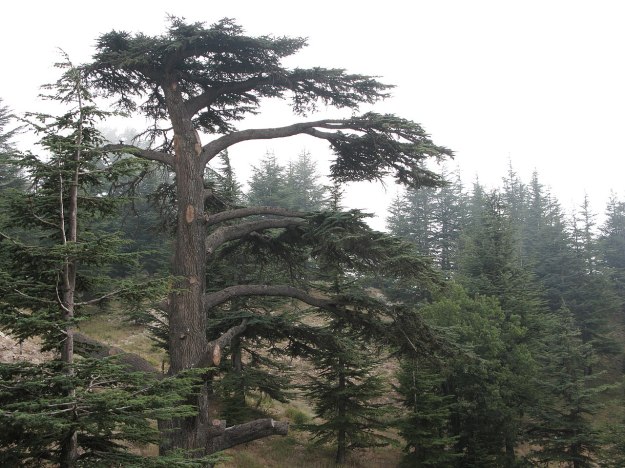 1 Now King Hiram of Tyre sent his servants to Solomon, when he heard that they had anointed him king in place of his father; for Hiram had always been a friend to David. 2 Solomon sent word to Hiram, saying, 3 “You know that my father David could not build a house for the name of the LORD his God because of the warfare with which his enemies surrounded him, until the LORD put them under the soles of his feet. 4 But now the LORD my God has given me rest on every side; there is neither adversary nor misfortune. 5 So I intend to build a house for the name of the LORD my God, as the LORD said to my father David, ‘Your son, whom I will set on your throne in your place, shall build the house for my name.’ 6 Therefore command that cedars from the Lebanon be cut for me. My servants will join your servants, and I will give you whatever wages you set for your servants; for you know that there is no one among us who knows how to cut timber like the Sidonians.”

7 When Hiram heard the words of Solomon, he rejoiced greatly, and said, “Blessed be the LORD today, who has given to David a wise son to be over this great people.” 8 Hiram sent word to Solomon, “I have heard the message that you have sent to me; I will fulfill all your needs in the matter of cedar and cypress timber. 9 My servants shall bring it down to the sea from the Lebanon; I will make it into rafts to go by sea to the place you indicate. I will have them broken up there for you to take away. And you shall meet my needs by providing food for my household.” 10 So Hiram supplied Solomon’s every need for timber of cedar and cypress. 11 Solomon in turn gave Hiram twenty thousand cors of wheat as food for his household, and twenty cors of fine oil. Solomon gave this to Hiram year by year. 12 So the LORD gave Solomon wisdom, as he promised him. There was peace between Hiram and Solomon; and the two of them made a treaty.

13 King Solomon conscripted forced labor out of all Israel; the levy numbered thirty thousand men. 14 He sent them to the Lebanon, ten thousand a month in shifts; they would be a month in the Lebanon and two months at home; Adoniram was in charge of the forced labor. 15 Solomon also had seventy thousand laborers and eighty thousand stonecutters in the hill country, 16 besides Solomon’s three thousand three hundred supervisors who were over the work, having charge of the people who did the work. 17 At the king’s command, they quarried out great, costly stones in order to lay the foundation of the house with dressed stones. 18 So Solomon’s builders and Hiram’s builders and the Gebalites did the stonecutting and prepared the timber and the stone to build the house.

The reign of Solomon sets in motion dramatic changes for Israel. The mobilization to build the temple is a massive undertaking requiring international cooperation for materials. Traditionally most interpreters of these early portions of Solomon’s reign have viewed the preparation and the construction of the temple as examples of the wisdom and faithfulness of Solomon to the LORD. However, there are multiple perspectives related to the temple and the building projects of Solomon and that are woven together in the report of 1 Kings on this massive undertaking which dramatically changes the religious landscape of the people.

The tabernacle constructed during the journey from Egypt to the promised land was to be a place where God could dwell among the people, but it was a tent designed to travel with the people. Once the people entered the land of Canaan there were several worship sites throughout the land, but the worship of the LORD often was modeled after the worship of the deities of the surrounding peoples. From a perspective of unifying the worship of the LORD in a common place and with a common practice the temple has the potential to be a unifying place where the name of the LORD can dwell, and the priest can hand on the law and its interpretation to the people. Israel had never before had a permanent place to worship the LORD or a place to become a central symbol of God’s presence among the people.

Yet, even when King David wants to build the temple of God during his reign he is met with the response of a God who is flattered but who refuses to be confined to a permanent place. While God indicates that David’s son will eventually build a house of cedar for the LORD, there is a thread of discomfort within the passage about God’s presence not being able to move among the people (2 Samuel 7: 1-17). The compromise in the construction is that temple will be a house ‘for the name of the LORD my God’ and not a place where God’s presence is limited to. God’s freedom will continue to expand beyond the temple. God will deign to show God’s presence in this place, but God will not be limited to only being present in this place among the people.

In the construction of a place of worship the expectation is that people will contribute their best to the endeavor. This was the practice in the construction of the tabernacle and Moses was reported to have more than enough for the project by a freewill offering (Exodus 35). Now the temple is the first public project of the Solomon regime, and it is done by the mechanism of taxation and forced labor. The temple may be a great public good, but the question of cost is subtly raised here in the text along with the broader question of what type of nation Israel is becoming. The negotiations between King Hiram and King Solomon may be necessary to secure the materials and good relations to ensure peace during the construction of the temple. Yet, the project comes with an extremely high price tag.

King Hiram of Tyre provided lumber and people skilled in construction when David established his household in Jerusalem after he conquered it. There is no indication of the cost David paid the King of Tyre for these resources and craftsmen, but this trade agreement marks the entry of Israel onto a much broader stage. Now in negotiations with the new king, Hiram continues to provide lumber and craftsmen in exchange for the agricultural produce of the land. In addition to supplying the needs of the household of Solomon, now the land must support the burden of the household of King Hiram of Tyre. Choon-Leong Seow names this section “Shady Deals and Oppressive Policies” (NIB III: 56) and it is likely that the deal cut between Solomon and this Phoenician king well versed in international trade is more favorable to the King of Tyre than the people of Israel. Looking closely at the amount of wheat and oil given it quickly becomes apparent that the numbers here are large. Roughly twice the amount of grain collected for Solomon’s household is given annually to the King of Tyre, and if you follow the Hebrew (unlike the NRSV which follows the Greek Septuagint in its translation) the 2,000 cors (almost 7,000 gallons) of oil is a wealth of agricultural resources traded for the cedar. The cedars of Lebanon are often associated with affluence and their use by the people of Israel comes at a high annual price tag. It is possible that Israel enjoyed many years of great harvests that may have made the construction projects bearable but knowing the stresses on the population by the end of Solomon’s reign we can see the beginning of the internal strain within the nation.

In addition to the cost in agricultural production is the cost in conscripted forced labor. As mentioned earlier, the people of Israel were the forced labor for construction in Egypt and this new project which in the text mobilizes over one hundred eighty thousand men for log cutting and transport, stone cutting and transport, and construction is another strain on the population. It is possible that Judah is excluded from this conscription (NIB III: 58) like it is possible they were excluded from the provision for Solomon’s household in the previous chapter, but this is assuming a differentiation between Israel and Judah. It also is a return to the ways of Egypt where the king enslaves the people and wealth of the nation is owned by the ruler.

The construction of the temple will be a focal point for the reign of Solomon and for the worship of the southern kingdom of Judah after his death. The temple of Solomon will stand as a central fixture of Jerusalem for centuries and will be a symbol of the faith of the people. Yet, the process of construction sounds some ominous notes as it becomes a public work that is done by the taxation and forced labor of the people. The suspicious part of my mind wonders if this is like the public work projects throughout the former Warsaw Pact countries where beautiful train stations, government buildings, and public spaces were constructed while the majority of the population lived in deprivation. Solomon’s early reign is rapidly changing the city of Jerusalem and the manner in which the population of the nation is governed. This place created for the name of God will be a source of public focus for many generations, but we are primed to wonder about the cost that this great building will exact not only on the wealth of the people but also on their identity.