Matthew 9: 18-26 Never Has Anything Like This Been Seen in Israel part 1 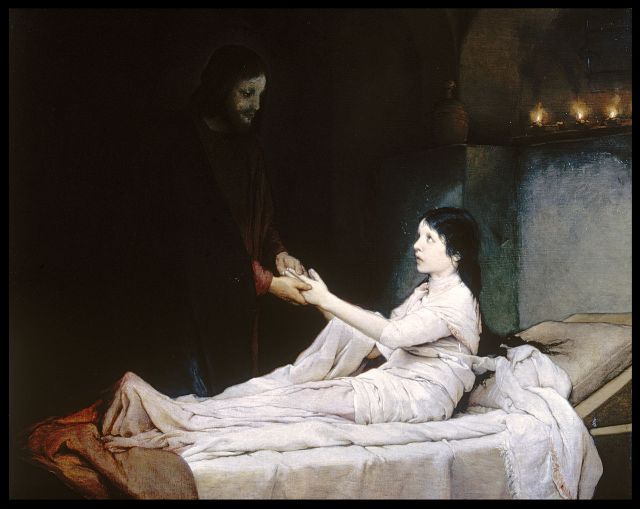 Gabriel von Max, The Raising of the Daughter of Jairus *(1881)

18 While he was saying these things to them, suddenly a leader of the synagogue came in and knelt before him, saying, “My daughter has just died; but come and lay your hand on her, and she will live.” 19 And Jesus got up and followed him, with his disciples. 20 Then suddenly a woman who had been suffering from hemorrhages for twelve years came up behind him and touched the fringe of his cloak, 21 for she said to herself, “If I only touch his cloak, I will be made well.” 22 Jesus turned, and seeing her he said, “Take heart, daughter; your faith has made you well.” And instantly the woman was made well. 23 When Jesus came to the leader’s house and saw the flute players and the crowd making a commotion, 24 he said, “Go away; for the girl is not dead but sleeping.” And they laughed at him. 25 But when the crowd had been put outside, he went in and took her by the hand, and the girl got up. 26 And the report of this spread throughout that district.

Matthew is an efficient narrator bringing together stories and structure to attempt to prepare us to be sent out as bearers of the good news. Comparing how Mark and Matthew construct their narratives, which are both designed to be heard and remembered, Mark often spends significantly longer in stories, like this one, where Jesus is bringing healing to those who need to receive it. Matthew’s narration of this story is roughly half the size of Mark’s because Matthew is moving quickly to what is commonly know as the ‘Mission discourse’ in Matthew 10. Matthew wants us to hear these final three healing stories as planting the seeds for the plentiful harvest that is coming at the end of the chapter.

Most hearers are familiar with the longer Markan and Lukan narration of this story, and some of the deletions that Matthew makes simply make the story shorter, others are interesting because they change the possible ways of hearing the story. The first major change is not reflected in most translations because in Matthew it is a merely leader who comes to Jesus, not necessarily a leader of the synagogue (of the synagogue is not in the Greek text, most translations harmonize this with the Mark and Luke parallels). The father here comes with an incredible request, to raise a daughter from the dead and although he doesn’t comment on the father’s faith it links the story to two others who ask on behalf of their children: the Centurion in Matthew 8:5-13 and the Canaanite woman in Matthew 15: 21-28. It is possible that Matthew wants us to hear this story in terms of a leader who is not a Jewish leader (although there isn’t the resistance that both the Centurion and the Canaanite woman receive so I view this as less likely), but it also may be Matthew using the bonds of parent to child in a powerful bond that makes us willing to ask the incredible and to believe on their behalf. The other instance of a father bringing a child occurs after the Transfiguration where a father brings his son who has seizures to Jesus and his disciples and bows down to Jesus asking for healing.

Jesus rises up and follows the father with his disciples but is interrupted on his journey. This first healing story, of the familiar pattern of three, actually involves two individuals seeking incredible things: a man on behalf of his daughter and a woman for her own healing. Matthew notes that the woman has been suffering for twelve years but deletes the age of the daughter (which in Mark and Luke is twelve structurally linking the two healings and the two suffers). The woman trusts that merely touching Jesus’ clothing will bring about healing. In both cases, the flow of blood and death, to touch the person would render a person unclean according to the law. By being out among those in the presence of Jesus this woman risks, in the views of the ancient world, contaminating anyone who comes into contact with her. Much like we have at times had erroneous ideas about the spread of diseases, the ancient world believed that contamination was spread by physical contact. The woman would have lost her place in society and in her desperate situation she dares to come up behind Jesus and touch the fringe of his garment. Even as Jesus ignores that taboos of purity violations of blood or death in the law, we have Matthew highlighting the fringe of the garment, a specifically Jewish custom in clothing. Jesus sees her, he doesn’t have to seek her out as in the other gospels’ narration of this scene, but his response is one of encouragement and announcing the healing that is done in her. It is her faith, her trust that Jesus can do that which she asked, which has, in the presence of Jesus, made her whole again.

The crowd in their mourning does not respond to Jesus as the father of the deceased girl does or the woman with the flow of blood. When Jesus tells them to cease their activities of mourning and to depart, ‘for the girl is not dead but sleeping’ they laugh at him. The crowd knows death when they behold it but unlike the girl’s father, they do not trust that Jesus or any other person can have power over death.  Yet, the father’s faith has caused Jesus to rise up and he will not be deterred by the crowd’s lack of faith. Instead he drives them out and proceeds to the girl and takes her by the hand and causes her to rise up. Jesus can do what Elijah and Elisha had done in bringing a child back to life, but Matthew is not content with us hearing Jesus as merely a prophet or wonder worker like Elijah or Elisha. Part of the cumulative effect of these three groups of miraculous stories and the introduction of titles is to draw the disciples and soon the crowds into wondering who this is who is in their midst because, “Never has anything like this been seen in Israel.” The word of this begins to pass throughout the land and the seeds are planted for the future harvest.

5 Responses to Matthew 9: 18-26 Never Has Anything Like This Been Seen in Israel part 1