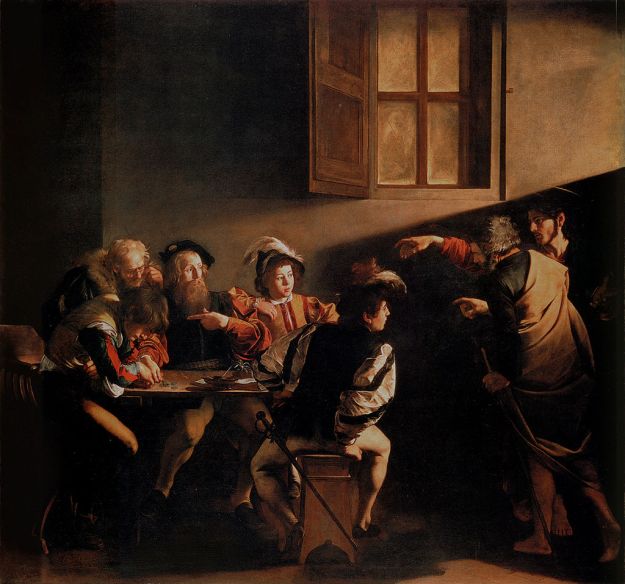 9 As Jesus was walking along, he saw a man called Matthew sitting at the tax booth; and he said to him, “Follow me.” And he got up and followed him.

10 And as he sat at dinner in the house, many tax collectors and sinners came and were sitting with him and his disciples. 11 When the Pharisees saw this, they said to his disciples, “Why does your teacher eat with tax collectors and sinners?” 12 But when he heard this, he said, “Those who are well have no need of a physician, but those who are sick. 13 Go and learn what this means, ‘I desire mercy, not sacrifice.’ For I have come to call not the righteous but sinners.”

Matthew composes his gospel for both the scribes who can read and the hearers who hear, and while we have lost the sensitivity to the rhythmic patterns that Matthew uses (especially when we break it up into small sections like is frequently done in worship) it is a skill that can be learned. Like a composer using a set of triplets to set up the following note (think for example of the beginning of Beethoven’s fifth symphony) and what comes before prepares us for what happens next. This interweaving of the narratives that highlight the identity and authority of Jesus with narratives that highlight what it means to follow Jesus prepare us for the next major block of instruction in chapter ten and connect us back to the Sermon on the Mount.

We are finally introduced to the disciple whose name is associated with this gospel, Matthew. Matthew’s name in Greek (Matthion) is closely related to the word translated followed him in verse 9 and disciples in verse 11 (mathetais) as well as the word translated learn in verse 13 (mathete). Ultimately a disciple is a learner, pupil or student of master who learn by listening and by following. Just as the name Matthew for the gospel gives us a clue of the purpose of the gospel, to form followers and learners from Jesus, also here in this central reflection on the nature of discipleship we continue to learn not only what it means to follow Jesus, but who our fellow followers might be. I’ve argued earlier in the Sermon on Mount against a perfectionistic reading of Jesus’ first sermon, here we find tax collectors and sinners reclining at the table with Jesus while the Pharisees protest this arrangement.

Matthew as a skilled editor places this text immediately following a story where Jesus has demonstrated he has the power to forgive sins. Jesus has authority over the elements, over the demons and over sins, stepping into a role that was presided over by the priests in the temple. Jesus claims for himself authority that the priests in the sacrificial system had mediated for the people of God. The sacrificial system was originally intended to be a means of reconciliation between God and the people and a way of restoring relationships within the community. Yet, we see in this story that there are those who by their vocation of by some previous action have been excluded from the reconciliation that the temple was to mediate. Matthew and the fellow tax collectors and sinners are those who, like the leper in Matthew 8: 1-4, would be assumed to be unclean and like the Centurion in 8: 5-13 would be viewed as emmisaries of a hostile empire. Any religious group has the potential to become exclusive with the insiders composing the righteous and the outsides consisting of the ‘sinners’ and yet we are encountering in Matthew a different understanding of what righteousness will consist of than the Pharisees or even the disciples of John the Baptist would conceive.

Matthew quotes Hosea 6:6 twice, once here and later in Matthew 12:1-8 in the context of plucking grain on the Sabbath. In both places we encounter one whose role is greater than the role of the temple. Jesus invites Matthew, and the other tax collectors and sinners to recline with him at the table, to break bread with them and invite them into the circle of followers invited to the banquet. The removal of the barrier for the sinners and tax collectors to gather with Jesus raises concerns among some other watchers of Jesus.

The Pharisees in this text refer to Jesus as ‘teacher’ like the scribe in Matthew 8: 19, and as I mentioned in discussing that scribe, when someone refers to Jesus as teacher in Matthew they are almost always challenging his authority. These Pharisees probably believe that one who shares bread with sinners becomes like them. They may point to a text like Proverbs 4: 14-17

14 Do not enter the path of the wicked, and do not walk in the way of evildoers. 15 Avoid it; do not go on it; turn away from it and pass on. 16 For they cannot sleep unless they have done wrong; they are robbed of sleep unless they have made someone stumble. 17 For they eat the bread of wickedness and drink the wine of violence.

But the way of interpreting scripture and the meaning of righteousness that Jesus embodies centers around mercy, and the use of Hosea 6:6 becomes a key verse to understanding the practices of Jesus. Jesus who has authority to forgive the sins of the paralytic has authority to welcome the sinner who is forgiveable. Jesus who can heal Peter’s mother-in-law, the paralytic, the Centurion’s child, and the Gadarene demoniacs is the physician who can heal the sick (literally the bad/evil ones, Greek kakoos). This the cumulative effect of this narrative in the string of preceding stories illuminates a different way of perceiving the relationship between God and those who have been excluded. As Richard B. Hays can state:

Thus, if the Pharisees go to learn what Hosea 6:6 means, they will need to read more than one verse. Once they search the wider context of God’s scriptural intentions, they will find there, in the midst of a judgment oracle against the people, a call for repentance and a portrayal of a merciful God who wants his people to show mercy, not contempt to those who have gone astray. (Hays, 2016, p. 126)

This merciful reading of scripture points to a merciful God welcoming those who have gone astray. Righteousness is not a perfectionistic bar which sinners and tax collectors can never clear, but instead is an invitation to be a part of a community of disciples like Matthew who recline with Jesus around the table amazed at their inclusion in this community of learners who are learning that it is blessed to be merciful because they to have received mercy.