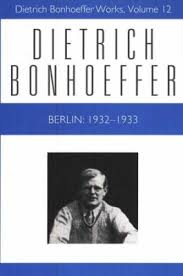 One of the gifts of reading more deeply into the lives and experiences of people in the past is the perspectives they can give us into our own time. Dietrich Bonhoeffer was a Lutheran pastor during the critical time leading up to and including the Second World War in Germany. In his collected works we can see not only the evolution of a thinker but we can also read in his letter, preaching and teaching the impact of the events on his teaching and thought. For example, in the critical time of 1932-33 (represented by DBWE 12) we see Bonhoeffer struggling with the Aryan paragraph and how the church can respond (especially in the context of a state church). While Bonhoeffer would consider this statu confessionis (an item that if adopted the church ceases to be the church) many of his colleagues, even in the Confessing Church, would not agree. Perhaps two of his most telling quotes come out of this time. First from his Christology lectures:

There are thus three possibilities for action that the church can take vis-à-vis the state: first (as we have said), questioning the state as to the legitimate state character of its actions, that is making the state responsible for what it does. Second is service to the victims of the state’s actions. The church has an unconditional obligation toward the victims of any social order, even if they do not belong to the Christian community…The third possibility is not just to bind up the wounds of the victims beneath the wheel but to seize the wheel itself. (DBWE 12:365)

And the second from immediately before the Reichstag elections where the Nazi party would emerge as the strongest party preaching on the letters to the churches in Asia in Revelation 2:

The church is doing a tremendous amount, very seriously and even sacrificially. But we are all doing so many things that come second, third, and fourth; the church is not doing the works it did at first. And that is precisely why it is not doing what is crucial. We celebrate; we attend the events where we should be seen; we try to be influential; we set up a so-called Protestant movement; we do Protestant youth work; we provide social services and care for people; and we have anti-godless propaganda—but are we doing the very first works, the one that epitomized what we are all about? Do we love God and our neighbor with that first, passionate, burning love that is willing to risk everything except God? (DBWE 12:444-445)