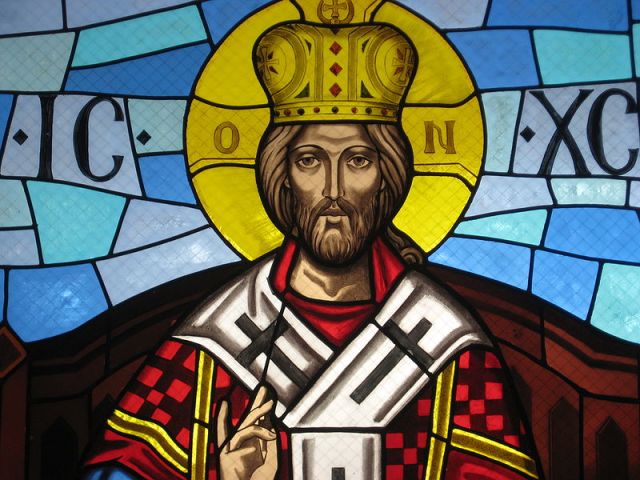 Stained Glass window at the Melkite Catholic Annunciation Cathedral in Roslindale, MA depicting Christ the King with the regalia of a Byzantine Emperor

<To the leader. Of the Korahites. A Psalm.>
1 Clap your hands, all you peoples; shout to God with loud songs of joy.
2 For the LORD, the Most High, is awesome, a great king over all the earth.
3 He subdued peoples under us, and nations under our feet.
4 He chose our heritage for us, the pride of Jacob whom he loves. Selah
5 God has gone up with a shout, the LORD with the sound of a trumpet.
6 Sing praises to God, sing praises; sing praises to our King, sing praises.
7 For God is the king of all the earth; sing praises with a psalm.
8 God is king over the nations; God sits on his holy throne.
9 The princes of the peoples gather as the people of the God of Abraham.
For the shields of the earth belong to God; he is highly exalted.

The mood of Psalm 47 is jubilant with its words continually urging the hearer to mark the celebration of the establishment of the kingship of God over all the nations and over all of creation. Structurally the psalm pairs actions of praise with a set of reasons for acclamation in a noisy celebration of triumph. While the idea of God as king may be a strange thought in a world where monarchies seem to be a romantic vestige of a past age it remains an important claim of both Christianity and Judaism in contrast to the claims of worldly power exercised by those with economic, political or military power. This psalm, like the rest of scriptures, does not recognize God only in a religious sphere. As Martin Buber stated:

He (God) is not content to be “God” in the religious sense. He does not want to surrender to a man that which is not “God’s”, the rule over the entire actuality of worldly life: this very rule He lays claim to and enters upon it; for there is nothing which is not God’s. (Brueggeman, 2014, p. 224)

The psalm may reflect a context of the relatively short window during the time of King David and King Solomon when Israel did exercise power over other nations, but it does not require this context. The psalm also would have served as a strong polemical reminder in times when Israel or Judah were small nations caught between the Egyptian, Assyrian and later Babylonian empires. For example, in contrast to the Babylonian celebration of the enthronement of Marduk the Israelites would come together to celebrate the enthronement of the LORD, the God of Israel, the God above any other god. In a time when the people of Israel were not a political or military power, they still held onto a belief that their God is not only powerful but was the God of all nations and all creation and they remained God’s chosen possession from among the nations.

The psalm begins with a command not just for Israel but for all the peoples to clap their hands and shout with songs of joy. The title of the LORD, the Most High, combines the name of God with a title that is often used to address God when people other than the Israelites are addressed. (Nancy deClaisse-Walford, 2014, p. 431) The psalm taps into the expansive hope that God would indeed be recognized as the ruler of all the peoples. The people of Israel were not to place their hopes upon their military prowess but instead to rely upon their God as the divine warrior who would not only protect them but who would allow them to occupy a central place among the nations of the earth. Israel’s identity is tied to the LORD’s election of them as a chosen people and God’s protection. In closing the first stanza of the psalm in verse five we see God personified as shouting as God ascends and either blowing a trumpet (or a shofar) or having a trumpet blown to celebrate this ascension to the place of honor and power.

The second stanza of the psalm with a four-fold command to sing praises. The psalm itself exuberantly models this song of praise to their God and King. The psalm acknowledges God’s place as the king over all creation and over every nation. God now sits enthroned above every other god and king and the worshippers add their voices to the clapping hands, sounding trumpets and shouts. Not only are the people of Israel joining in this praise, but the leaders of the nations also gather to add their voices to the acclamation of God’s reign.

Even though I don’t live in a time and place where kings are the normal manner of governance the idea of the kingdom of God is such a foundational idea for Christianity and that involves God assuming king-ship over the world. We pray in the Lord’s prayer for God’s kingdom to come and yet, we sometimes forget that means acknowledging God not only as one who holds spiritual power but as one who executes worldly leadership as well. Additionally, we may think of this noisy description of clapping, singing, shouting and blowing trumpets as a little too exuberant for the idea of a dignified worship of God. Many people in European and American cultures were raised with an expectation of a restrained expression of emotion in the context of worship but in an imagined future where people from all across the world come to join in the celebration hands clap, shouts go up, trumpets sound and a voice are lifted up singing joyful praises at the realization of God’s reign over all the earth.

Like Loading...
This entry was posted in Biblical Reflections, Psalms and tagged Book of Psalms, Kingdom of God, Kingship of God, Psalm 47. Bookmark the permalink.