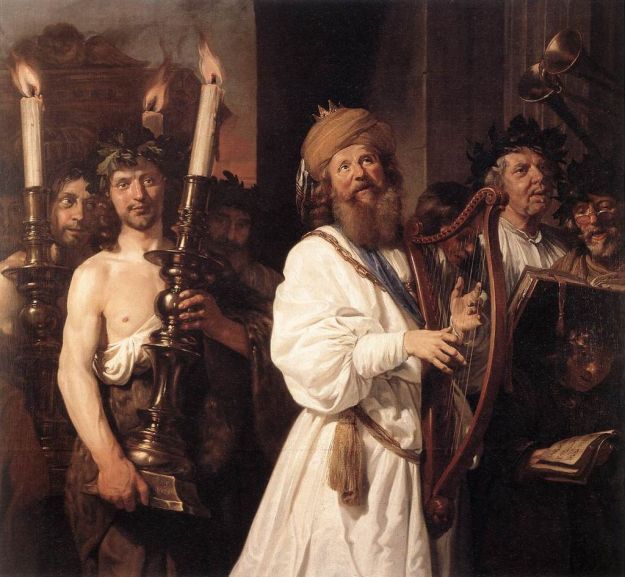 <To the leader: with stringed instruments. A Psalm of David.>
Answer me when I call, O God of my right!
You gave me room when I was in distress.
Be gracious to me, and hear my prayer.
2 How long, you people, shall my honor suffer shame?
How long will you love vain words, and seek after lies? Selah
3 But know that the LORD has set apart the faithful for himself;
the LORD hears when I call to him.
4 When you are disturbed, do not sin;
ponder it on your beds, and be silent. Selah
5 Offer right sacrifices, and put your trust in the LORD.
6 There are many who say, “O that we might see some good!
Let the light of your face shine on us, O LORD!”
7 You have put gladness in my heart more than when their grain and wine abound.
8 I will both lie down and sleep in peace;
for you alone, O LORD, make me lie down in safety.

One of the gifts of the Psalter is the range and depth of emotions that it shows as the various Psalmists struggle and rejoice and lament and celebrate their lives with the LORD. Faith is rarely, if ever, a linear progression of growth or a static unmoving reality but a relationship that endures times where one party has moved away or is no longer hearing and times of incredible closeness and intimacy. Psalm 4 is to me a good example of this movement within the life of faith as the Psalmist moves from complaint to reassurance, from question into faith and from need into safety. It begins with a cry, “Answer me when I call” and directs that call to the God who is the source of the Psalmist’s righteousness and identity. The Psalmist reflects back upon the way God has been present: listening, making a space for the petitioner, responding in grace instead of judgment. There is a dissonance between the Psalmist and the people, somehow the Psalmist has fallen out of favor, their name has been dishonored and they are following the words they want to hear rather than the truth. Perhaps the positioning of this psalm encourages us to hear it in the same circumstances as the previous Psalm, while David is fleeing after the rebellion of his son Absalom has taken over Jerusalem. Yet the Psalmist find comfort in their identity.

It is in this identity, the Psalmist considers himself one of the righteous, one who has been set apart, one whom the LORD listens to. In a time when the Psalmist words go unheard by the people, they are heard by the LORD. In a time where the identity of the Psalmist in the eyes of the people is that of the unrighteous in God’s eyes they remain the righteous one. Much as Job can appeal to God’s judgment as he endures the questioning of his friends, or Paul can state in the letter to the Romans 8.31 “If God is for us, who is against us?” the Psalmist can hold tight to the identity they have in the LORD. So the Psalmist returns to the practices of how they will live, not sinning, offering right sacrifices, pondering on one’s bed but not losing sleep over it. And the Psalmist rapidly moves in this brief prayer from complaint into resting in peace and safety, from the moment of anxiety to the gladness and reassurance of the LORD’s blessing. In an echo of the Aaronic blessing from the book of Numbers:

The LORD bless you and keep you;
the LORD make his face shine upon you and be gracious to you;
the LORD lift up his countenance upon you, and give you peace Numbers 6: 24-26

The Psalmist can say “let the light of your face shine upon us and finds strength and trust in their identity as they continue in their journey as one of God’s set apart ones.

3 thoughts on “Psalm 4: Finding A Space in the Blessing”