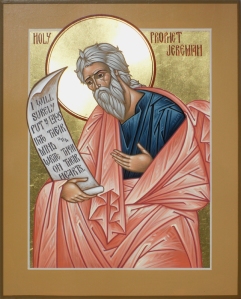 7 How can I pardon you?
Your children have forsaken me, and have sworn by those who are no gods. When I fed them to the full, they committed adultery and trooped to the houses of prostitutes.
8 They were well-fed lusty stallions, each neighing for his neighbor’s wife.
9 Shall I not punish them for these things? says the LORD;
and shall I not bring retribution on a nation such as this?
10 Go up through her vine-rows and destroy, but do not make a full end;
strip away her branches, for they are not the LORD’s.
11 For the house of Israel and the house of Judah have been utterly faithless to me, says the LORD.
12 They have spoken falsely of the LORD, and have said,
“He will do nothing. No evil will come upon us, and we shall not see sword or famine.”
13 The prophets are nothing but wind, for the word is not in them. Thus shall it be done to them!
14 Therefore thus says the LORD, the God of hosts:
Because they have spoken this word, I am now making my words in your mouth a fire,
and this people wood, and the fire shall devour them.
15 I am going to bring upon you a nation from far away,
O house of Israel, says the LORD.
It is an enduring nation,
it is an ancient nation,
a nation whose language you do not know,
nor can you understand what they say.
16 Their quiver is like an open tomb;
all of them are mighty warriors.
17 They shall eat up your harvest and your food;
they shall eat up your sons and your daughters;
they shall eat up your flocks and your herds;
they shall eat up your vines and your fig trees;
they shall destroy with the sword your fortified cities in which you trust.

R.E.M.’s song It’s the End of the World as We Know it fits well here:

That’s great, it starts with an earthquake, birds and
snakes, an aeroplane and Lenny Bruce is not afraid.
Eye of a hurricane, listen to yourself churn – world
serves its own needs, dummy serve your own needs. Feed
it off an aux speak, grunt, no, strength, the Ladder
start to clatter with fear fight down height. Wire
in a fire, representing seven games, and a government
for hire at a combat site. Left of west and coming in
a hurry with the furys breathing down your neck. Team
by team reporters baffled, trumped, tethered cropped.
Look at that low playing. Fine, then. Uh oh,
overflow, population, common food, but it’ll do to Save
yourself, serve yourself. World serves its own needs,
listen to your heart bleed dummy with the rapture and
the revered and the right, right. You vitriolic,
patriotic, slam, fight, bright light, feeling pretty
psyched.

Six o’clock – TV hour. Don’t get caught in foreign
towers. Slash and burn, return, listen to yourself
churn. Lock it in, uniforming, book burning, blood
letting. Every motive escalate. Automotive incinerate.
Light a candle, light a motive. Step down, step down.
Watch your heel crush, crushed, uh-oh, this means no
fear cavalier. Renegade steer clear! A tournament,
tournament, a tournament of lies. Offer me solutions,
offer me alternatives and I decline.

The prophetic poetry of death continues, as does the language of God’s woundedness. This will continue through much of Jeremiah, for the prophet points to the end of a world. These are words designed to rend the world apart, to point to an end that is coming. This has nothing to do with the frenzy some people get wrapped around thoughts of the end of the world people would talk about in Revelation (and most people fundamentally misunderstand most of Revelation—especially as it has been twisted around in the interpretations in the movies or literature like the Left Behind series). No this is about the end of the world as the people know it. Temple and priest, prophet and king, Jerusalem and Judah, wealth and prosperity, home and heart are all approaching a time when they will all be consumed by war.  God seems to still be looking for a way to pardon, but sees no way and so the end of the relationship is coming so that perhaps out of the death of the relationship something new might evolve. The root is to be left, so that perhaps something new might grow. The prophets words burn and consume, these are words that point to destruction and they are indeed painful for the prophet and their eventual result will consume the people. They point poetically to the future that is on the horizon and the on the horizon is the smoke of an approaching army.

The nation that will eventually come is Babylon, although the prophet may not know who they are at this point. As an American, we are very blessed to not have had a war take place on our soil since the Civil War (1861-1865) and except for those who have served in conflict overseas the utter destruction of warfare has been lost. In an invasion the invading army takes the harvest to feed their soldiers, sons and daughters would be killed, raped or enslaved, flocks become feasts for the invading army, herd become spoils, the fruit of vines and fig trees may be taken, then as in the earlier image in this part of the poem the branches may be stripped away-used in fires or simply burned to deny the food to the residents of the land under siege. Walled cities were the places where people would flee to, but a siege is a horrific experience once food or water becomes short. We will have ample time to deal with the horrors of a siege later in Jeremiah. The future is dark, the words are painful, and the prophet tries to point to a reality that the world as they know it is ending, but apparently the people feel fine.