The Poetry of Death and Destruction: Jeremiah 4: 11-18 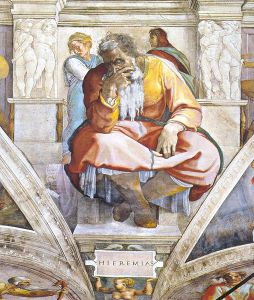 The Prophet Jeremiah by Michelangelo

11 At that time it will be said to this people and to Jerusalem: A hot wind comes from me out of the bare heights in the desert toward my poor people, not to winnow or cleanse- 12 a wind too strong for that. Now it is I who speak in judgment against them.
13 Look! He comes up like clouds, his chariots like the whirlwind;
his horses are swifter than eagles– woe to us, for we are ruined!
14 O Jerusalem, wash your heart clean of wickedness so that you may be saved.
How long shall your evil schemes lodge within you?
15 For a voice declares from Dan and proclaims disaster from Mount Ephraim.
16 Tell the nations, “Here they are!”
Proclaim against Jerusalem, “Besiegers come from a distant land;
they shout against the cities of Judah.
17 They have closed in around her like watchers of a field,
because she has rebelled against me, says the LORD.
18 Your ways and your doings have brought this upon you.
This is your doom; how bitter it is! It has reached your very heart.”

The prophet lapses into his deathly poetry again, trying desperately with his words to shake his people out of what Brueggeman calls their “religious indifference and covenantal recalcitrance”  (Brueggemann 1998, 56) Yet the words seem to be falling on deaf ears, the party continues and nobody wants to sober up and go home. Yet the Northern tribe of Dan is proclaiming the disaster that is coming.

Though it will be the Babylonian army that will come and lay siege to Jerusalem and take the people into exile, they are not named. The people and the prophet live in different theological realities.  The prophet sees the way in which God is sovereign over not just Israel or Judah, but over the besiegers and conquerors as well, and that God is indeed moving in judgment towards the people of Judah for the ways they have not kept their covenantal faith.

The people are presented with two conflicting realities. The rulers and the priests pass on the platitudes that things are ok, as well as apparently many of those looked upon as prophets. They continue to prop up the Davidic regime and the temple hierarchy, and the people really have no reason to question the way things are. It is a much different world, where most people are illiterate and do not have anything beyond their oral memory to challenge the king and the priests who not only bear the recorded word of God, they are the only ones who are educated enough to be able to approach the words we take for granted. Also worship has become focused on the temple, and so most people may make it to the temple for the festivals (much as people who come at Christmas and Easter) and may have their own practices which may or may not line up with the temple ideology, but they are reliant upon the priests and the king to point them to what covenantal faithfulness looks like. Jeremiah, the prophet and poet, is one of the few voices of dissent pointing to the way in which the leaders have failed to be the exemplars of covenantal faithfulness that may lead the people back into God’s way of justice and shalom.