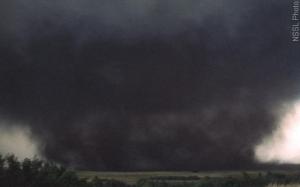 5 Declare in Judah, and proclaim in Jerusalem, and say:
Blow the trumpet through the land; shout aloud and say,
“Gather together, and let us go into the fortified cities!”
6 Raise a standard toward Zion, flee for safety, do not delay,
for I am bringing evil from the north, and a great destruction.
7 A lion has gone up from its thicket, a destroyer of nations has set out;
he has gone out from his place to make your land a waste;
your cities will be ruins without inhabitant.
8 Because of this put on sackcloth, lament and wail:
“The fierce anger of the LORD has not turned away from us.”

9 On that day, says the LORD, courage shall fail the king and the officials; the priests shall be appalled and the prophets astounded. 10 Then I said, “Ah, Lord GOD, how utterly you have deceived this people and Jerusalem, saying, ‘It shall be well with you,’ even while the sword is at the throat!”

When I lived in Oklahoma, tornado sirens were a way of life. When spring came you knew that if the siren was blaring its dissonant tones that you needed to check the TV to see where the storm might be and how dangerous the storm was. Some storms were storms that you could weather in place, going to the safe room in your house. But some storms, if you were in their path you didn’t want to stay in place and wait out, you needed to flee to designated areas that were better able to withstand the winds.  And yet sometimes even fleeing to a strong place is not enough, as was the case of the F5 tornado that struck Oklahoma City in 1999 destroying or badly damaging over 8,000 homes.

Jeremiah has the unfortunate role of being the siren, alerting the people to a disaster they do not expect nor do they want to see. War is approaching, an unspecified invading  army is coming to lay waste to the land. Destroying cities, burning crops, killing and enslaving and the Lord has withdrawn the protection they have relied upon in the past. The prophet goes even farther, to place the Lord behind the movement of the predicted enemy. The Lord has made a choice, a dreadful choice, a choice against his former people. It is a choice the prophet has allowed us to see the Lord agonizing over, and yet the pieces are in motion, the storm is in motion and yet the prophet continues to hope for a turn. The prophet desires for the people to put on sackcloth, to lament and wail, and perhaps the Lord will turn once more.

Jeremiah makes a bold statement, in essence placing the blame at God’s feet, for the people have heard and received the message that it is well (most likely from the king and his officials, the priests and the prophets) while terror approaches. One of the roles of the prophet is to stand between the people and God, challenging both. The prophet will love both God and the people and weep with and for both of them, and in standing between the two his heart and body will be broken. Yet Jeremiah, among the prophets, seems to stand alone-for the other prophets of his time seem to be singing in unison with the kings and priests. Jeremiah speaks dangerous words, but they are the words of the faithful willing to enter into the struggle with God, to challenge God, to even go so far as calling God a traitor while still remaining in the relationship. As Moses in the Exodus, Jeremiah intercedes for the people he loves and yet even Jeremiah will have his limits as we will find.