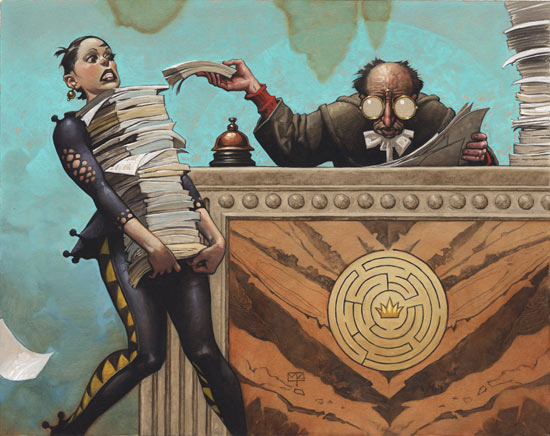 9 The king’s secretaries were summoned at that time, in the third month, which is the month of Sivan, on the twenty-third day; and an edict was written, according to all that Mordecai commanded, to the Jews and to the satraps and the governors and the officials of the provinces from India to Ethiopia, one hundred twenty-seven provinces, to every province in its own script and to every people in its own language, and also to the Jews in their script and their language. 10 He wrote letters in the name of King Ahasuerus, sealed them with the king’s ring, and sent them by mounted couriers riding on fast steeds bred from the royal herd. 11 By these letters the king allowed the Jews who were in every city to assemble and defend their lives, to destroy, to kill, and to annihilate any armed force of any people or province that might attack them, with their children and women, and to plunder their goods 12 on a single day throughout all the provinces of King Ahasuerus, on the thirteenth day of the twelfth month, which is the month of Adar. 13 A copy of the writ was to be issued as a decree in every province and published to all peoples, and the Jews were to be ready on that day to take revenge on their enemies. 14 So the couriers, mounted on their swift royal steeds, hurried out, urged by the king’s command. The decree was issued in the citadel of Susa.

The bureaucracy springs into action, and perhaps like all bureaucracies this is the reason for the unexplainable delay, for the previous sections took place in the first month and now we are in the third month. Did Mordecai need to do a study, convene a committee, and enter into a debate with the Jews of Susa to come up with the right wording (I’m being snarky here). I don’t think that the Jews before would have been unable to defend themselves, but the edict with the force of Mordecai and the king’s authority with it puts them in a much stronger position, and perhaps, like in Nazi Germany, the new edict strips away the permission  to act out against the Jewish people and still to be following orders.

On the one hand, this gives the authority for a preemptive strike, to kill, destroy and annihilate anyone who might attack.  Now I wouldn’t want to go too far in this direction, remember the Jewish people are a small people in exile dependent on the favor of a powerful empire, but the edict and Mordecai’s force behind it does create fear. It is so easy for the oppressed to become the oppressor when the roles are reversed. This may be a story of reversals, but it is not a story of mercy.

Now for the Jewish people this is a story of triumph, what was to be a early Kristallnacht becomes a day of deliverance. God (although unmentioned) once again chooses the weak and the powerless and turns the tables on those who want to take advantage of them. Yet the violence of the end of the story does trouble me, yet it is the way of the story.