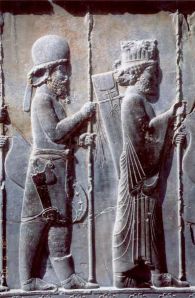 Our villain is introduced in the story, Haman the Agagite and in the reading that would occur on Purim I understand that his introduction and place throughout the story is accompanied by boos and hisses. What comes to mind for me is if you go to see the Rocky Horror Picture Show at midnight in a theater and people jeer and throw popcorn and the audience becomes a part of what makes the story go, in fact the audience becomes a part of the telling and enacting of the story. But Haman is the villain, and his actions will drive the story from this point forward.  We don’t have a reason why Haman is promoted to the position of second only to the king, he is not lifted up as doing anything great like Mordecai has, but ultimately why and how he got in his position is not important. What drives the story is that he does have the king’s ear and is able to act with the king’s authority on his desires.

The next perplexing part of the story is why doesn’t Mordecai bow-is he just stubborn? Is there some other reason? Is it an interpersonal conflict-or does it reflect a blood feud a long standing ethnic hatred. Haman’s identity as an Agagite points this direction going back to King Saul and King Agag of the Amelikites in 1 Samuel 15: 8-33, but how would a person tell a descendent of Benjamin from Agag apart. Apparently, unlike Esther, Mordecai’s Jewishness becomes known, but why offend in this way when you are an exiled people in a foreign land.

It reminds me of an incident in the life of Dietrich Bonhoeffer which takes place on June 17, 1940. Dietrich, a Lutheran pastor who would later be executed for his part in an unsuccessful plot to assassinate Adolph Hitler, was sitting with his friend Eberhard Bethge in the garden café in Memel. While they were in the café the announcement came that France had surrendered, and the people in the café stood on their chairs and began singing ‘Deutchland, Deutschland über alles.’ Bonhoeffer stood and extended his arm in the Hitler salute, while Eberhard stood there in shock. Bonhoeffer whispered, ‘Raise your arm! Are you crazy?’ saying later ‘we shall have to run risks for very different things now, but not for that salute.’  (Bethge 1970, 2000, 681)  (Wind 1991, 139)

The reaction does not fit the offense, to take on Mordecai is beneath Haman and so his thought is like the Emperor in the Star Wars series, “wipe them out, all of them.” A personal offense is met by genocide. Perhaps, like so many other genocides some long simmering hatred comes to the surface when it is favorable for one party, like in Bosnia. Perhaps this may also point to the danger that can come even in the most assimilated populations, as the German Jews were prior to World War II and the Holocaust. Genocide is a very distasteful topic, but it rears its head here, as in many times in both ancient and modern history. There perhaps is some drive to set up insiders and outsiders, to protect the insiders and to destroy the outsider and you could make an argument that this is payback for the Jewish wiping out of the Amalekite people but at some point we need to understand that the oppression of another people based on race or ethnic group is evil.