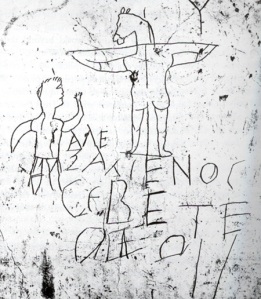 Anti-Christian Graffito from the Paedagogium, part of the Imperial Palace on the Palatine Hill, Rome

On the 18th and 19th of July of 64 CE the city of Rome burned, and of the fourteen districts only four remained relatively untouched. Emperor Nero presented the Christians as scapegoats for the city’s destruction, and one of the reasons that may have made them a particularly good scapegoat was that the early Christians in Rome may have lived in the regions of the city that were not burned (Peter Lampe draws that conclusion in From Paul to Valentinus: Christians at Rome in the First Two Centuries,47) Tradition has it that both the apostles Peter and Paul will be martyred under emperor Nero. From 64 CE on the Christians are noticed in varying levels throughout the Roman Empire and they presented  a unique challenge to the authority of the Roman Empire.

All empires to varying extents impose their will on their population and upon their challengers by the promises of reward for good behavior and the consequences of negative behavior. For example, a person may know the consequences of speeding, but if they deem the consequences light enough they may choose to exceed the speed limit anyways. There are more consequential examples: the mere accusation of being a traitor may have devastating consequences in most societies. Empires are built upon a network of favor, wealth and power being exchanged and in most times and places the pain of challenging that network (which may result in the loss of power, arrest, torture and even death) is far too high a cost to seriously entertain. In Rome the gladiatorial arenas, crucifixions, and various other forms of public execution and torture work to maintain conformity and fear of the Romans and their designated local authorities. The Roman Empire was neither more evil nor harsher than empires that came before, but in these early Christians they found a unique challenge.

Most of the early Christians were not powerful individuals, they were a relatively small minority within the societies they found themselves scattered within and they were not organized into large churches. There was some organization as bishops and leaders began to emerge, but they did not set out to challenge the Romans Empire. Often referred to as ‘atheists’ because they would not participate in the adoration of emperors or gods (which also had the consequence of denying many of these early Christians access to meat and feasts that accompanied these celebrations-in a society where meat was a rare treat this is a big sacrifice) and this led to significant challenges for the minority of Christians who were of a higher standing in society. Most Romans found what little they understood of Christianity as puzzling-they worshipped a crucified person (a huge scandal), they refused to enjoy the benefits of the empire, they were sometimes accused of cannibalism (not surprising when you think about what the Eucharist must have sounded like to outsider ears) and yet no amount of persecution seemed to make these Christians go away, rather they seemed to multiply even quicker.

The severity and extent of the persecution of Christians by the Roman Empire varies through time and region. Most of the persecution is regional and there never seems to be an organized campaign to completely seek out every Christian, but the experience of persecution by many Christians was very real. At points where the persecution was the most visible, “Christians were part of a good day out; part of the entertainment; part of the show” ( Christopher Kelly, The Roman Empire, 78) and it is precisely at this point where they posed the greatest challenge to the empire. The gladiatorial games were not a gathering of the dregs of society, the elite and the good solid citizenry were there and the best seats were occupied by the leaders and elite of the society (the closest comparison we would have are the luxury boxes at many sporting events). Yet at the point where the Roman society demonstrated itself and its superiority on display Christians challenged the heart of the violence and order that stood at the center of the games. Take for example the writing of the second century Ignatius, bishop of Antioch:

Let there come upon me fire and the cross, and packs of wild beasts, lacerations, dismemberment, and dislocation of bones, the severing of limbs, the crushing of the whole body…Allow me to be an imitator the Passion of my God…Do not speak of Jesus Christ and still long for the world!

As a movement that refused to acknowledge the superiority of the emperor but rather worshipped a person who had been crucified on a Roman cross, who acknowledged Jesus as their Lord rather than Caesar, and who were not afraid of death this causes a lot of problems for the authority of the empire. How do you threaten a person who doesn’t fear torture and death (or at least does not view these things as more important than their allegiance to their God) and when a person views a shameful death (in the societies eyes) as the greatest honor how do you deal with that? In fact the more you persecuted these Christians publicly, the more their numbers seemed to grow.

In 312 the Roman Emperor Constantine would become the first to allow Christianity and this would dramatically altar both Rome’s and Christianity’s stories, but before that point Christianity would face its own challenges as it tried to figure out what was and was not Christianity. It had interacted with many new cultures, new languages and Christianity was not a centralized movement. There were leaders of the church in Rome, or Antioch, or Alexandria for example and many churches had collections of gospels, letters, and teachings in combination with the Hebrew Scriptures they inherited from Judaism but there was no central authority to say what was in and what was not. It is to this challenge we will turn next.