To Catch an Albatross 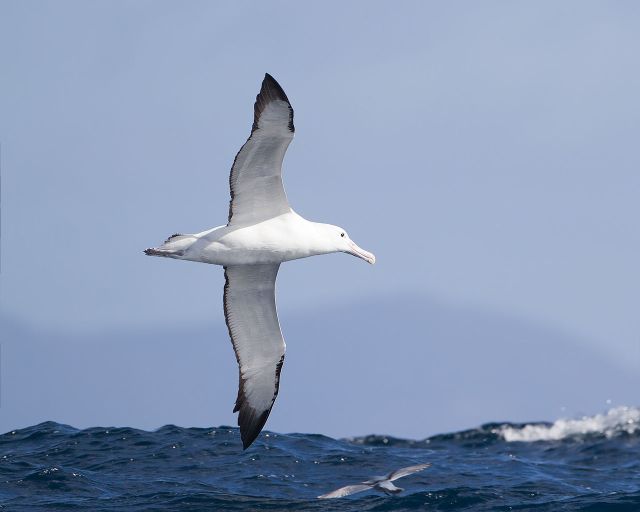 I devised my plan to catch the great albatross
With fishes, I beckon him to circle lower each day
Slowly coaxing him down from the clouds above
Until the day when I might break bread with him
Sharing communion with him upon the deck
As we pass through the waters to the promised land
Fellow sailors, one of air and one of the sea
Passengers being borne by captured inspiration

For in my mind I wanted my friend to stay near me
And so, a snare was set to keep him from fleeing too far
Some measure of freedom I would allow my new pet
But spirits of air are not meant to be restrained in their flight
And heartbroken the bird soon began to look sickly
It refused to eat, it broke our communion in its fast
And soon in my dreams it lay motionless upon the deck
In captivity breathing out its final expiration

The skies and seas mourned the passing of this noble creature
This prince of the air which had graced us with its presence
And the ship came to a halt as we entered into the doldrums
No current and no wind to fill the sails and move us along our exodus
Water, salty water, everywhere, but not one drop to drink
As the sun beats upon these mariners growing ancient
Waiting for the days to pass upon the still and silent sea
Wishing for some inspiration from heaven to move us

In the nightmare, we dwelt for days unknown on those dead waters
Mere skeletons of the men we were prior to our journey’s genesis
Caught with our exodus slowly baking in this blue wilderness
With blackened lips and withered tongues the crew sought
The Jonah that had cursed their voyage and whose sacrifice
The seas thirsted for so that relief might come to those trapped
On this immobile wooden coffin which drifts aimlessly
Wanting some body to fill the uninspired wood and cloth

For I was the offending party, the one caught with the albatross
Now destined to be food for the fishes that circle this dead man
Instead of communing with the spirit of the air I am consumed
By the demons of the abyss that rise up to claim my body
Descending into the watery hell where I uttered my last cry
The albatross hung around my neck like a sinner’s crucifix
The spirit of the air and the man of soil offered to the sea
As my final cry expires into the watery tomb of the ocean

Water falls from the sky and the haunting cry of the albatross
Awakens the sleeper like Lazarus called forth from the tomb
And the salty air enters into my lungs as I wipe tears from my eyes
For I am alive and the albatross flies free, sailing the wind
This angel of mercy which flies before my life coaxing us along
As a gentle rain falls upon the creaking deck of the ship
And I am refreshed in my journey through the waters
As I inspire both the salty air and the new life I was granted

Like Loading...
This entry was posted in Poetry and tagged Albatross, Inspiration, Narrative poetry, Rime of the Ancient Mariner, sailing. Bookmark the permalink.

2 Responses to To Catch an Albatross