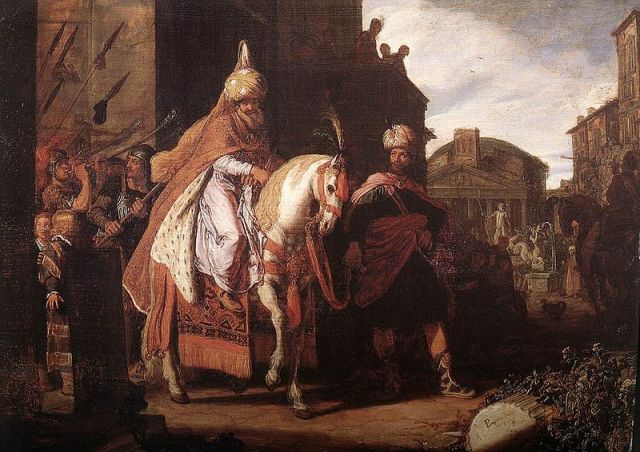 Pieter Lastman, The Triumph of Mordecai (1624)

12 Then Mordecai returned to the king’s gate, but Haman hurried to his house, mourning and with his head covered. 13 When Haman told his wife Zeresh and all his friends everything that had happened to him, his advisers and his wife Zeresh said to him, “If Mordecai, before whom your downfall has begun, is of the Jewish people, you will not prevail against him, but will surely fall before him.”

14 While they were still talking with him, the king’s eunuchs arrived and hurried Haman off to the banquet that Esther had prepared.

One of the consistent themes throughout the bible, and particularly the New Testament is the theme of reversals, surprising reversals of the mighty being brought low and the lowly being raised high. Perhaps the most well known is Mary’s song (the Magnificat for those familiar with the Latin) in Luke 1: 46-55:

He (God) has shown the strength with his arm; he has scattered the proud in the thoughts of their hearts. He has brought down the powerful from their thrones, and lifted up the lowly; he has filled the hungry with good things; and sent the rich away empty Luke 1: 51-53

God is never mentioned in the book of Esther, and although the Septuagint (the Greek Translation of the Old Testament), Josephus (a Jewish historian who lived shortly after the time of Jesus) as well as the Rabbis all explicitely point to God’s involvement in the king’s insomnia, the Hebrew texts at best silently infer God’s participation. Yet, here is the outworking of the salvation of the people being played out in what seem like a series of well timed coincidences but may indeed be providence.

What better cure for insomnia that to read from the records of the proceedings, and yet in the midst of reading is the realization that an honor was not given for a great service. Honor is a big deal in the ancient world, and failing to honor someone who honor is due to is critical (hence the conflict between Mordecai and Haman). And yet it is Haman who is trapped here, whose ego believes that he is once again to be honored and gives what is an extremely high display of honor. Mordecai, by being publicly honored by the king, by becoming a benefactor of the king has become all but untouchable. Mordecai is publicly shamed (although unintentionally by the king who seems oblivious to what is going on just outside his court) among the officials who are watching to see how this conflict between Mordecai and Haman will play out. Haman’s friends and wife know that this is a bad omen and that the world is changing. Place have been reversed, Mordecai is lifted up as the one the king wishes to honor, and Haman covers his head and mourns. There is yet one more major pivot to the story but things are beginning to spiral out of control for Haman.

I’m going to close with Rory Cooney’s adaptation of Luke 1: 46-55, the Canticle of the Turning:

My soul cries out with a joyful shout that the God of my heart is great,
And my spirit sings of the wondrous things that you bring to the ones who wait.
You fixed your sight on your servant’s plight, and my weakness you did not spurn,
So from east to west shall my name be blest. Could the world be about to turn?
My heart shall sing of the day you bring. Let the fires of your justice burn.
Wipe away all tears, for the dawn draws near, and the world is about to turn.

Though I am small, my God, my all, you work great things in me,
And your mercy will last from the depths of the past to the end of the age to be.
Your very name puts the proud to shame, and to those who would for you yearn,
You will show your might, put the strong to flight , for the world is about to turn.
My heart shall sing of the day you bring. Let the fires of your justice burn.
Wipe away all tears, for the dawn draws near, and the world is about to turn.

From the halls of pow’r to the fortress tow’r, not a stone will be left on stone.
Let the kings beware for your justice tears every tyrant from his throne
The hungry poor shall weep no more, for the food they can never earn;
There are tables spread, ev’ry mouth be fed for the world is about to turn.
My heart shall sing of the day you bring. Let the fires of your justice burn.
Wipe away all tears, for the dawn draws near, and the world is about to turn.

Though the nations rage from age to age, we remember who holds us fast:
God’s mercy must deliver us from the conqueror’s crushing grasp.
This saving word that our forebears heard is the promise which holds us bound,
Till the spear and the rod can be crushed by God, who is turning the world around.
My heart shall sing of the day you bring. Let the fires of your justice burn.
Wipe away all tears, for the dawn draws near, and the world is about to turn.
(Evangelical Lutheran Worship, 723)